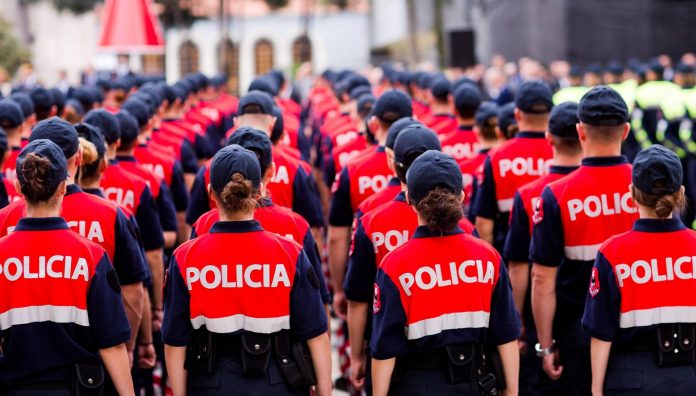 The Minister of Internal Affairs Bledi Çuçi promised a salary increase at 150% for police officers of the State Police who work away from home. The initiative is expected to be effective in January 2022 and it was well received by the police union, however the increase at 150% is considered to be fictitious. The expert of economics Zef Preçi is skeptical and suggests that recruiting and training individuals from the local communities is more effective than transferring police officers from one area to the next.

“The draft budget that we just approved bears two good news for the State Police: The first one is that the salary of State Police employees, who exercise their duty away from their home during the next year will receive an increase in bonuses that will take the salary of employees far from home at 150%” – stated the Minister of Internal Affairs, Bledi Çuçi on October 22 after the meeting of the government.

Based on this statement, Faktoje addressed the Ministry of Interior with a request for information, in which we required to become acquainted with the criteria on which the addition on the salary will be calculated for this category of employees and how many officers are to benefit from this decision. Screenshot, request for information addressed to the Ministry of Interior Affairs dated 28.10.2021

In their response for Faktoje on November 5, the Ministry of Interior did not provide any data by arguing that these details are part of the procedures of Parliament.

“All legal steps and required decisions will be taken immediately after the law for the Budget of 2022 is approved by Parliament. The respective act which is to be approved by the Council of Ministers will include the criteria, ways and specific conditions of the provision of the bonus for State Police employees who work away from home” – states the response that Faktoje received from the Ministry of Interior. Screenshot, response received by the Ministry of Interior, dated 05.11.2021

On November 5 when speaking at the Commission of Security in Parliament on the draft-budget 2022 for the Ministry of Interior, Minister Bledi Çuçi stated the following:

“… 1179 police officers will benefit immediately, because we will include all police officers in this scheme, from inspectors to main leaders who work far away from their home. According to the project and calculations we have carried out for the increase for this item, we have divided them by kilometers, so by the distance of the employee working far away from home starting from 20 to 60 km of distance will benefit 20% more on the salary, from 61 to 120 km will benefit 30% on the salary and over 121 km will benefit 50% more on the monthly salary” – stated the Minister of Internal Affairs.

On November 9, during the meeting of introduction of the 2022 draft-budget for the State Police, Çuçi stated that the salary bonus for this category of employees in the State Police will start in January 2022. The Minister of Interior Affairs, Bledi Çuçi during the introduction of the draft-budget 2022 for the State Police, dated November 9, 2021

“This is a considerable increase and as we speak there are about 1200 police officers who benefit directly from this addition, from this bonus the budget of 2022 will provide them. Certainly this figure will change depending on the movements within the structure of the State Police. For the first time in the budget for next year there will be special treatment for these employees” – stated the Minister of Interior.

When asked by Faktoje regarding the promise of increasing the salaries of the officers in this category at 150%, the head of the union of the state police, Sadetin Fishta states that the initiative is more than welcome, but that he is suspicious about the increase at 150%.

“There is no salary increase; this is a bonus over the base salary, the salary will remain the same, this is a bonus for special work nature. It has often been stated that there is a misunderstanding, it is not an increase of 150% on the salary. It is an increase of 20%, 30% and 50% on the base salary. The decision is already effective, but not in percentage, it was fixed with kilometers. The decision for financial treatment for employees who work far away from home.  With this new decision, the treatment is better because the benefit will be higher.  I think that this decision will increase performance, because there is a high number of employees who work away from home.  Right now we are expecting it to enter into force in 2022, we hope it will be implemented and that it is real and not just propaganda”- states for Faktoje the Head of the Union of the State Police.

Further on Fishta states that this practice is also common in other countries.

“Countries such as Northern Macedonia apply the same percentage practice, they even have other benefits, e.g. if they work weekends they benefit of a salary increase due to being deprived from family time. So they also get a percentage for that”- states Fishta.

The expert of economics, Zef Preçi states for Faktoje that he is skeptical, arguing that instead of transferring police officers, they can invest in recruiting and training individuals as police officers.

“Even though in principle this measure is positive and helpful to police officers, it is being used as a wrong tool that can turn into a source of abuse. The increase aims to encourage employees to go work in these areas, but I don’t think that is a solution, supplementary payments are only worth for doctors who work outside the territory. For other services it would be desirable to qualify, train and recruit individuals living in that area. It makes no sense to send a police officer from Kukës to work in Has, since Has is an area with great poverty and you could hire a policeman from the community and train him. Thus the service should be provided by the community and this can’t be done by delegating, but by including, engaging and recruiting from the community” – the expert suggests.

According to him, if changes in salary are to be made then a national study should be conducted.

“Salaries should be studied at the national level so that there is a pyramid; there can’t be partial changes which are mostly motivated by electoral interests than enhancement of conditions, qualification etc. We should institutionally choose the practices of good governance of public finances and suggest using CASH compensation as little as possible since it can become a source of abuse for purposes of this nature which can be solved by special transport”- states the economics expert. On November 15, while presenting the draft-budget for 2022 in Parliament, Prime Minister i Edi Rama, repeated his promise to increase salaries at 150% for police employees who work away from home, a vow which remains to be fact-checked in the first months of 2022.

“We inject significant financing. We increase salaries with a special bonus up to 150% for police employees who work away from home”- states Rama.

The reconstruction of the Koman - Vau i Dejës axis, an unkept promise hiding under the argument of the energy crisis