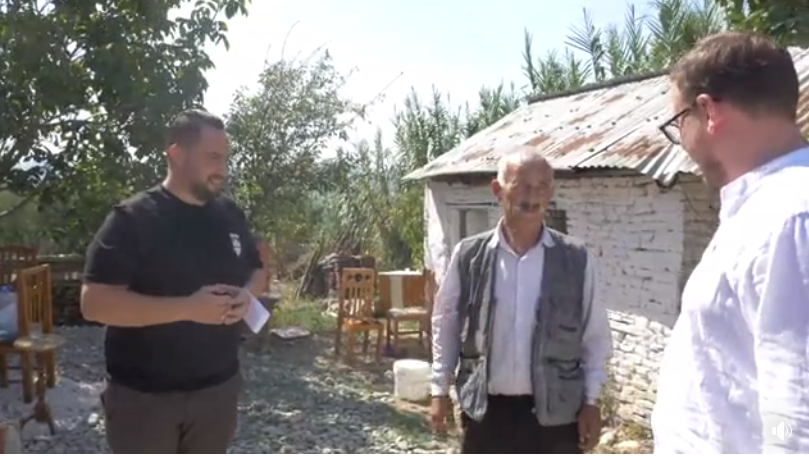 On September 20th, the Mayor of Shijak Mr. Elton Arbana promised for Gjepala Unit that Mr. Osman Rusi’s house, which had been damaged by the earthquake of 26 November 2019, would be ready to move into in the first week of October. His house is amongst the 124 dwellings in this administrative unit scheduled for rebuilding with State Budget funds. Despite the promises made, no houses have yet been fully rebuilt in Gjepala Unit, and out of the 150 houses under rebuilding in Shijak Municipality, only one family in Rrubjek Unit, Maminas, has moved into their home.

The Mayor of Shijak, during an on-site inspection of the rebuilding process of houses damaged by or demolished after the earthquake of 26 November 2019, stated that Mr. Osman Rusi’s house would be ready in the first week of October:

“According to the adopted scoring system, upon the approval of the Municipal Council, the rebuilding works commenced earlier for some households who have  retirees and  are in need, and this is why your house will be ready in the first week of October.”

On 9 October, the date by which Osman Rusi’s house should have been ready, “Faktoje” conducted an observation in the Administrative Unit of Gjepala, where his house and the other 124 houses to be rebuilt are located. The pictures clearly show that the rebuilding works are far from completed, whereas the deadline has long expired. We asked the workers on the site to provide an estimation on the remaining duration of the works. According to them, this would depend on the working speed of each team, but it would require several weeks. When we spoke to Mr. Osman Rusi, he stated:

“We have lived in a rented house since the earthquake hit, and receive a bonus by the Municipality.

My household is composed of four members. The earthquake was quite distressing, but we are content and are looking forward to moving into our house.” “Faktoje” also visited the house of Mr. Sefer Gashi, which was scheduled to be ready by mid-September, however, one month after the stated deadline, it is still under process. According to the team we met on the site, this house would require at the very least another 3 weeks to be ready.

“We started the plastering works 5 days ago, and it is a process that takes 4-5 days, while the full rebuilding of the house itself might require up to three weeks – the workers said. Another house under rebuilding in that same administrative unit is that of the Lumshi elderly couple, who are counting the days until they can move into their house. The lady of the house Mrs. Safie Lumshi and her ill husband Mr. Sali live in a shed near their house that is still under rebuilding.

“They have left it unfinished and they keep postponing it! They have not even brought the required furnishings. I was told the doors would be brought this week, but the week is already over”- Mrs. Safie told “Faktoje”. On 1 October, “Faktoje” submitted a request for information to Shijak Municipality, inquiring on the number of completed houses and the number of residents who have moved into their rebuilt dwellings. Shijak Municipality informed us that it is unable to provide the requested information as it is not in the capacity of a procurement, implementation or supervising unit, such roles being the responsibility of the Albanian Development Fund according to the Municipality. On the other hand, it is still unclear as to why the Mayor makes promises and provides rebuilding deadlines considering these circumstances.

“Faktoje” submitted a request for information to the Albanian Development Fund to inquire on the number of rebuilt houses in Shijak Municipality.

The Albanian Development Fund informed us that none of the 150 houses currently under rebuilding is ready yet and the contract expires in early February.

Based on fact-checks by “Faktoje”, it results that only one house has been rebuilt, located in Rrubjek Unit, Maminas, part of Shijak Municipality.