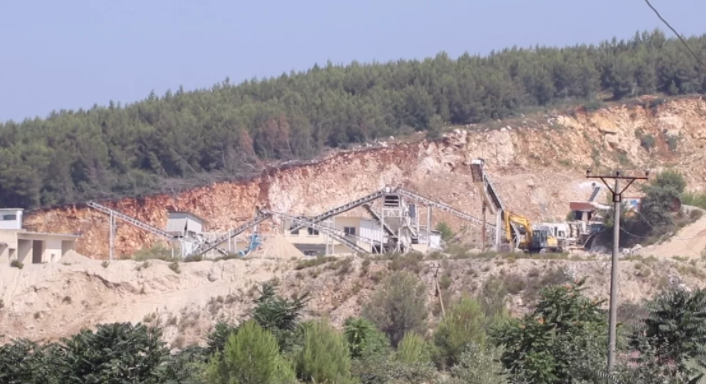 291 companies have operated in the field of quarries, cement and lime in the last 7 years in Albania. The exploiting companies are required by the law to rehabilitate the areas where they carry out the activity to the extent of 100% with their own funds, but according to the National Environment Agency, only 12 companies have carried out quarry rehabilitation from 2017 to 2019. Damage to the environment, but also to health, according to the data provided by the Institute of Public Health show that the number of people who suffer from the respiratory conditions has increased in the regions of Berat and Kruja.

Minister Klosi, but also Prime Minister Rama, have been committed over the years to stop the environmental massacre, but it seems that the rehabilitation of the environmental damage caused in some areas by these companies, will be paid by Albanian citizens.

During an on-site inspection on Tomorri mountain in 2017, in which it was also present the Minister of Tourism and Environment, Mr. Blendi Klosi, 12 quarries were fined and suspended as they were not operating in accordance with environmental parameters and were using mining permits in a completely illegal way.

In addition to the fine and revocation of the environmental permit, Minister Klosi said that all their documentation will be reviewed in detailed and according to the violations that will be found, strict measures will be taken, considering even criminal proceedings.

“We can not allow these quarries, like many other quarries in Albania, to exploit natural resources beyond any environmental criterion. All environmental permits issued for quarries, which do not meet the criteria, will be revoked immediately.”

On the other hand, Kruja is an unparalleled history of mountain exploitation causing an environmental catastrophe. After Prime Minister Edi Rama came to power, he immediately promised that all quarries would be closed as they caused major environmental problems. On 2nd December 2014 he considered the return of Skanderbeg Mountain to normalcy a national obligation.

“There are 500 thousand tree seedlings that are planned to be plant this season. It is the first massive rehabilitation project of green areas in Albania, and we have a national obligation to return the mountain of Skanderbeg to normalcy and we will definitely fulfill it!” – said Rama in 2014.

What does the law stipulate?

The law requires the companies that exploit state property to rehabilitate them to the extent of 100% with their own funds. The legislation clearly states that the drafting of the rehabilitation plan and the commencement of the progressive career (quarries) rehabilitation by the companies, shall start in the first year after its exploitation. * Law on the exploitation of quarries

Hundreds of companies have operated since 2014 in Albania

Regarding the number of quarries that have operated or are operating in Albania from 2014 to 2021, Faktoje requested information from the National Environment Agency, and according to the data provided by this institution it turns out that there are 291 companies which operate in the field of quarries, cement and lime production in our country. They are classified as follows:

* An excerpt from NEA response How much green area is restored by these companies?

According to the National Environment Agency, only 12 out of 291 entities of the list, have rehabilitated the areas in which they operated and the rehabilitation process was carried from 2017 to 2019, i.e. in a three-year time frame. According to the Directorate of Inspection and Control at the National Environmental Agency, during the last two months (June – July) of 2021, the inspection teams has taken only one (1) administrative measure that consists in “Fine” for entities that exercise this type activity.

In the above-mentioned response, this institution informs us that “NEA does not measure industrial emissions. These measurements are made by the subjects themselves according to the deadlines defined in the permit”.

When Faktoje requested NEA information on the submission of the measurement reports carried out by the companies, the institution in question did not provide any response.

What do the Municipalities state?

Faktoje sent a request for information to the municipalities of Kruja and Dimal (Ura Vajgurore) to find out if these institutions have conducted inspections on the following entities: * The request sent to municipalities of Kruja and Dimal (Ura Vajgurore)

Only the municipality of Dimal (Ura Vajgurore) provided a response to the request in question, which, unlike NEA, informs us that “Each entity performs self-monitoring by licensed studios and submits the report with the measured values to the National Environmental Agency”. Who is paying for the damage to the environment?

The National Agency of Protected Areas announced a tender (dated 12/01/2021) in the amount of over 33 million ALL, VAT included, on “Rehabilitation and afforestation of the Makaresh -Zidoll area in the Protected Area (PA) of Krast-Vrion in Kruja”, where 60% of the whole surface is completely destroyed. It seems that the quarry businesses, which are licensed by the government, pay to the state only 1% of the financial value of the quarry production, and no other tax is required, on the condition that after the exploitation of the area, they shall reforest it at their own expense, in fact are not affected by law in force.

Faktoje communicated with the Director of the National Agency of Protected Areas (NAPA), Mr. Zamir Dedej, to be informed whether the above-mentioned area was included in the protected areas and which companies had exercised their activity in that area.

In his response, Mr. Dedej informed us that the area is classified as a protected area and several companies have exercised their activity there, among them also “Salillari” company.

“Dear all, as the document stipulates, that area is part of Krasta-Vrijon PA. It has been exploited as quarry by several companies, but I have no idea which they are. As I remember, one of them used to be Salillari Company. It does not matter which companies were, it matters the fact that they must rehabilitate the area”- writes Dedej.

Based on other investigations conducted by Faktoje, it results that the State Supreme Audit has conducted an audit report on the municipality of Dimal (Ura Vajgurore) a year ago, in which it states that there were violations in the implementation of contracts of quarry companies. According to this report, the economic damage caused amounts to 42,161 thousand ALL.

But what is the reality of the situation? Faktoje conducted field-trips to see the environmental impact caused by these companies. Although the law clearly stipulates that deforestation or removal of vegetation cover must be done gradually in accordance with the works, the images show that in Dimal (Ura Vajgurore) the companies have already removed all the vegetation around the works area. Apparently, there is no trace of area rehabilitation, in terms of vegetation of the area or tree seedlings in none of the active quarry sites.

Impact on health – increase of diseases related to the respiratory system

In addition to the impact on the environment, the non-rehabilitation of vegetation has affected the health of citizens and residents of the area. According to the official information that Faktoje requested from the Institute of Public Health, the number of diseases related to the respiratory system has increased during the last four years in the municipalities of Dimal (Ura Vajgurore) and Kruja. On 13/08/2021, the residents of the village of Lumas have filed a lawsuit against the mayor of Dimal, Juljana Memaj and the administrator of “Salillari” company, at the Special Prosecution against Corruption and Organized Crime (SPAK).

In the criminal report addressed to the Special Prosecution, 123 residents of this village accuse the mayor for “Abuse of Power”.

Meanwhile, the residents accuse the administrator of “Salillari” company for a series of criminal offenses such as “Land Abuse”, “Illegal deforestation”, “Fire destruction of forests and forest environment” and “Damage to habitats in environmentally protected areas”.

According to the residents, “Salillari’ has destroyed the crown of pines at the quarry of Guri i Bardhë in the municipality of Dimal. Considering it an environmental massacre, they accuse the company of burning about 30 hectares of forest just for their own benefit.

According to the environmental experts, failure to rehabilitate these areas in time has a long-term impact on human health, as well as on flora and fauna.

“Companies are obliged by law to compensate for these damages, but law enforcement and monitoring always still remain one of the weakest points in Albania. The impact on human health, landscape, flora and fauna is a significant and long-term one. If they start with rehabilitation and compensation measures right now, it will take decades to see the effect of these measures.” – said Prof. Ferdinand Bego, who is also Deputy Dean at the Faculty of Natural Sciences at the University of Tirana.

Are summer health centers being utilized to detect COVID-19?