The deadline expired once more, but the Hospital of Laç is nowhere to be seen 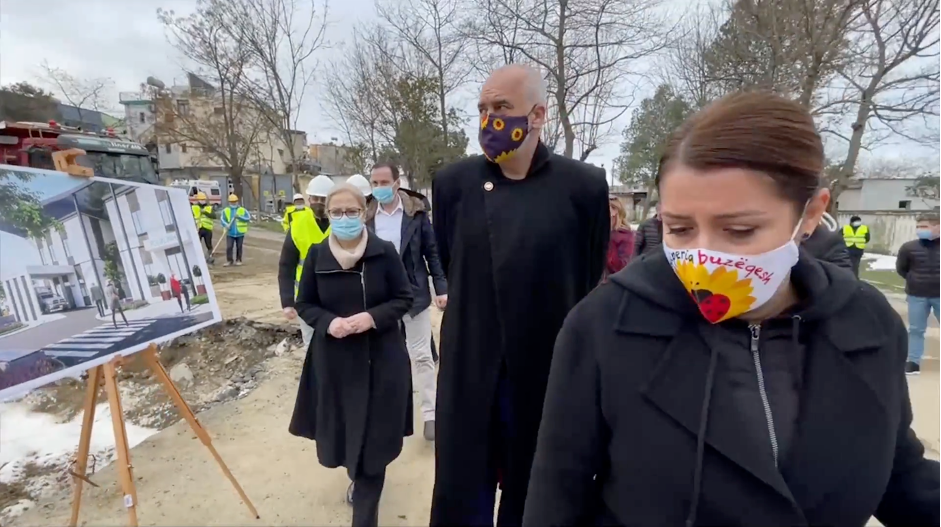 The reconstruction of the hospital is one of the greatest necessities since the earthquake of 2019 in the city of Laç. The progress of works for this health facility that should cover the needs of about 80 thousand residents has been dragged for over a year. According to the promises made by Prime Minister Rama, the reconstruction of the Laç Hospital should have ended by June 2020, whereas in February 2021, he gave a new deadline, according to which the hospital would be ready in 4 months. Faktoje went out on the field the day the next deadline expired, but the hospital of Laç was still nowhere to be found.

On February 16, 2021 Prime Minister Rama conducted his next inspection at the hospital alongside the Minister of Health, Mrs. Ogerta Manastirliu and the mayor of Kurbin, Mrs. Majlinda Cara. At the time of the arrival of the head of the executive, the construction site was still being cleaned, although work on this health facility should have been completed in June 2020, according to previous government pledges. The new deadline posed by Mr.Rama on February 16, for the construction of the hospital was 4 months. The Prime Minister asked the construction managers to work 3 shifts to finish the work before the deadline.

“You have to work 24 hours a day, three shifts, so that the works can be finalized before the deadline. It is possible since there is not a lot of work to do and I think that with this technology we can be successful.” – he said.

The Hospital of Laç, which will be completed with funds of the Albanian government, will be built with a light steel system and gypsum panels, so that it can be ready as soon as possible. “This investment is long-awaited for the community and I’d like to immensely thank the Prime Minister for it. In fact, these companies should work 24 hours a day and I need this company to work here day and night because this investment is necessary for the citizens during the pandemic. “- stated the mayor of Kurbin, Mrs. Majlinda Cara on February 16, during a conversation with Prime Minister Rama.

On June 16, 2021, or 4 months after the commitment was made, Faktoje went to the city of Laç to inquire on this promise. The situation we encountered on the ground proved that the completion of the works and the opening of the Laç hospital won’t happen anytime soon. We tried to talk to the responsible engineers, so that we could understand the reasons for the delay in the reconstruction and the violation of deadlines, but they refused to talk to Faktoje.

“We are not authorized to speak on the matter.” – stated one of them. We then went to the offices of the Municipality of Kurbin, where we talked to the person responsible for the reconstruction process at this municipality. Despite the fact that mayor Majlinda Cara had stated that she would follow the process personally, we were addressed to the Ministry of Health.

“We cannot provide any information, because it is not our asset. “The Ministry of Health is the implementing unit and you should address them for everything,” stated the representative of the Municipality of Kurbin. Afterwards, Faktoje addressed the media spokesperson of the Ministry of Health and Social Protection, to ask her when the reconstruction of the hospital of Laç will end. WhatsApp conversation with the spokesperson of the Ministry of Health, June 16, 2021.

After receiving the reply that we should address the Ministry of Health officially, we send a request for information

Request for information to the Ministry of Health and Social Protection, June 16, 2021

Regardless of the answer, the inspection on ground on the Prime Minister’s promise that the Hospital of Laç would be ready was unkept for the second time.

Were COVID-19 hospitalization cases reduced by vaccination or natural immunity?

Veliaj: No building permits in the center of Don Bosko and at the Lake dam when I become mayor