Wildfire emergency/Firefighters “at war” without equipment and machinery 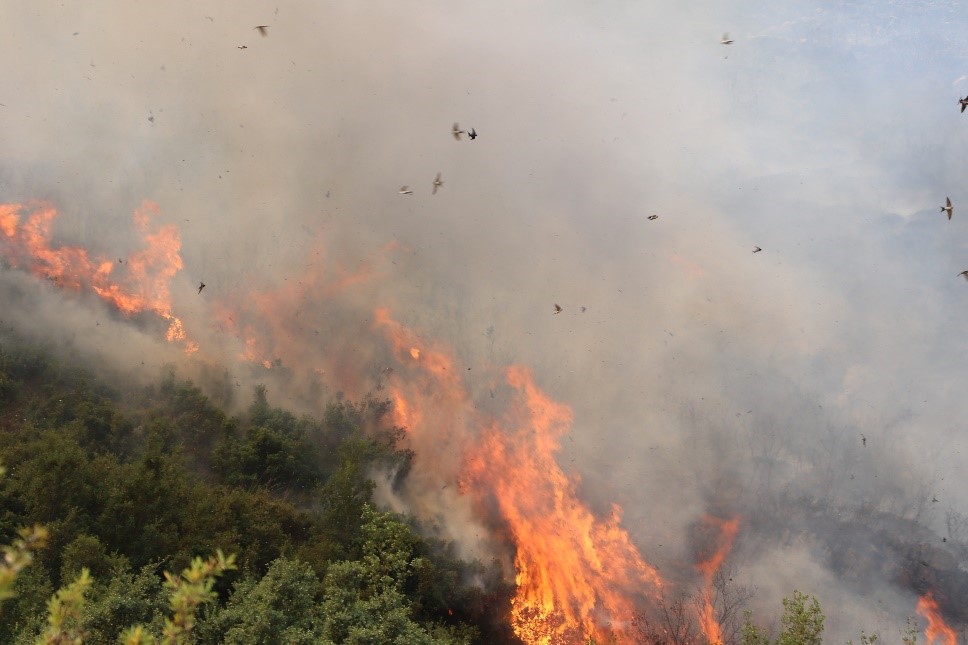 The Head of Civil Emergencies Haki Cako called for municipalities to have vehicles, people, equipment and budget available for civil protection, as a primary obligation of theirs. However, what is the investment of the central and local government to date to deal with such emergencies?

“Faktoje” confirmed that the number of staff in 27 fire departments has increased significantly. In 2014, there were 103 employees, whereas in 2021 the number of employees amounts to 517. Instead of developing infrastructure or purchasing special clothes, the annual budget mostly covers salaries. Similarly, the Civil Emergency budget has fallen from 2015 to the first quarter of 2021, according to the Ministry of Finance. The majority of investments covers salaries, while much fewer go for capital investments. In 2017, the said budget was 0, while capital expenditures in other years have covered trainings and purchases of computers or shelves. *Active flames near dwellings in the village of Dukat 08/04/2021 Photo: Inva Hasanaliaj_ www.faktoje.al The flames have reached near the village of Dukat on the ninth day of wildfires burning across Vlora.

“We have been sleeping outdoors for three days. We are scared for ourselves and our children. All village men are out there helping. The worst is yet to come, since rain over the winter will cause all of the rocks on the mountain to tumble down and fall on us.” – T.F, a 68-year-old Dukat resident, told “Faktoje.”

Residents in the area were on the mountain with water buckets carried from their homes, assisting the Armed Forces and firefighters. Vlora remains a problematic wildfire location, according to the Ministry of Defense.

The Armed Forces and Civil Protection Agency staff were on site to help out. There were also two fire engines that could not be utilized due to the challenging terrain. The only helicopter utilized until 12 o’clock was the one that brought 4 firefighters equipped with water pumps to the top of the mountain. Each water pump had a capacity of only 20 liters. There was a noticeable shortage of specific equipment, such as suitable outerwear and fire extinguishing equipment. A group of 9 soldiers of the Armed Forces climbed the mountain with only 4 shovels. *AF on hold due to inability to proceed any further 08/04/2021 Photo: Inva Hasanaliaj

Firefighters close to the wildfire nearing the village were also lacking specific outerwear in such a situation. Situation in the Vlora Fire Department

There was an obvious lack of investments in the Vlora Fire Department building, which had been constructed since the Italian occupation. Firefighters do not receive uniforms each year. According to the data that “Faktoje.al” has obtained from Vlora Municipality, the last investment in outfits/uniforms by the institution was in 2018. According to the director of this department, Mr. Kastriot Bega, there is a total of 15 vehicles (including fire engines), but only 7 fire engines are available, the rest are out of order and are kept in the building, taking up considerable space. The tiller truck was also out of order. According to the firefighters, it is a very important vehicle in cases of apartment and high-rise building fires. Only one of the 7 fire engines available in Vlora has been recently purchased. The rest were donated in 1997. The Head of Civil Emergencies Haki Cako called for municipalities to have vehicles, people, equipment and budget available for civil protection, as a primary obligation of theirs.

How prepared are Regional Fire Departments in the country? The collected information regarding the investments carried out in 27 fire departments in the country visibly indicates that there has been a progressive increase in staff from 2014 to 2021.

From 2014 to 2021, there has been a five-fold firefighting staff increase for each of the 27 municipalities that provided information.

According to the information provided by municipalities, it was noted that the staff expanded each year, but there was no increase in the number of equipment or any betterment of uniforms and specific outfits.

The Municipality of Tropoja, for example, claims in its response that the department only covered salaries from 2014 to 2021.

Another example is the Lezha Fire Department, where uniforms were only purchased once between 2014 and 2021, namely in 2017. In Dimal Municipality, where there are 17 employees working in this sector, only one uniform has been purchased in 2020. According to the data we received, it results that the investments in fire engines are disproportionate to the number of new employees. The 27 municipalities comprise 64 vehicles, 6 of which are out of order due to being depreciated. Devoll Municipality has only one fire engine available, which is currently out of order.

“Faktoje” submitted a request for information to the Civil Protection Agency, which has yet to receive a reply. “Faktoje” contacted the Ministry of Defense to inquire on the investments made in regards to strengthening the Civil Protection Agency. However, instead of a reply, we received an invitation to attend an explanatory session that would allegedly answer each of our questions.

After we decided on the meeting date, we received no further reply by the Ministry about any further details. We sent another e-mail requesting a reply to our previous inquiry, but the institution has yet to respond. The information showed that the majority of investments concern salaries, fewer of them go to capital investments. In 2017, the said budget was 0, while capital expenditures in other years have covered trainings and purchases of computers or shelves.

Through a simple calculation excluding the two natural disasters, the value of capital investments in the Civil Protection Agency from 2015 to the first trimester of 2021 amounts to ALL 134.21.835 million, which is six times less than when the disasters occurred.

Moreover, investments suddenly increase during emergencies and then decrease in the following years.

Under the “lens” of State Supreme Audit

As regards the situation involving wildfires in the recent days, the State Supreme Audit, upon order of the Head, Mr. Arben Shehu, initiated an audit at all levels of fire response structures. On 30/07/2021, the State Supreme Audit commenced on-site inspections of the structures that manage fire extinguishing. The audit will check on the management carried out regarding fire extinguishing, starting with the equipment use and the organizational aspect. The SSA will also check tenders for firefighting equipment, as well as other levels of civil emergencies, regarding whether they physically match the ones purchased and their absence during operations.

The municipality of Durres cannot even afford the salaries for city maintenance; waste management in the hands of the government.

Million euros investments for plants but, the wastewater is still discharged into the sea