Residents of Marikaj and Marqinet villages in Vora have not moved into new homes, even though it is three years since the tragic earthquake of November 26th. Faktoje established from its field verification that some of the homeless families have returned to their uninhabitable houses, which have not yet been demolished. Other families have improvised huts in the hope of surviving their fourth winter without a roof over their heads. Meanwhile, in the center of Vora, there are still ruined buildings that are expected to be demolished.

“In Marikaj and Marqinet, in the construction site of the individual houses for families, which have opted for the reconstruction grant.

We are working every day so that every family can start and finish their houses as soon as possible, the houses they lost on November 26th, 2019”, announced the Municipality of Vora in 2021. 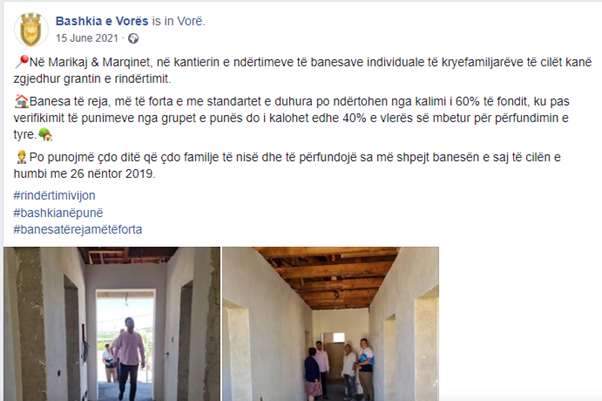 In connection with this promise, we made an on-site verification. We were in Vora on September 21st, where we talked with citizens who were affected by the tragic earthquake of November 26th, 2019.

During the on-site verification on September 21st, we found that in the area of Marikaj there were still houses damaged by the earthquake of 3 years ago, but not yet collapsed. The residents say that no one has come to check on their houses, as they emphasize that they have gone several times to the Municipality of Vora to ask. In the absence of a solution, some of the homeless families have returned to the homes planned for demolition, seriously endangering their lives.

“We have been waiting for 3 years. We will do them today, we will do them tomorrow. Sometimes they say we will build them for us, then they say they will just give us the money. We are not getting anything. People have nowhere to go, some have returned to their damaged houses. They are risking their lives, I don’t know what to do with this state”, says a 45-year-old worriedly. 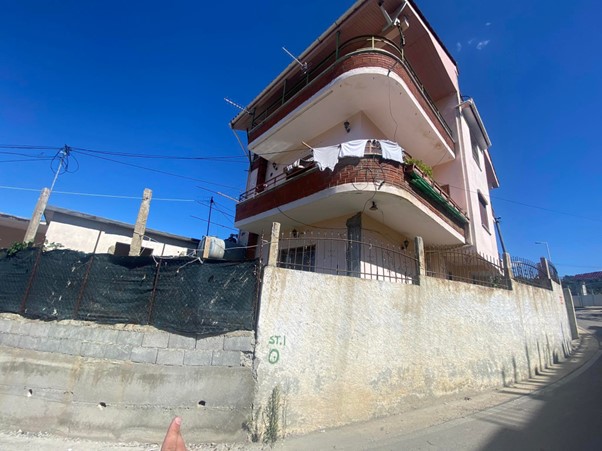 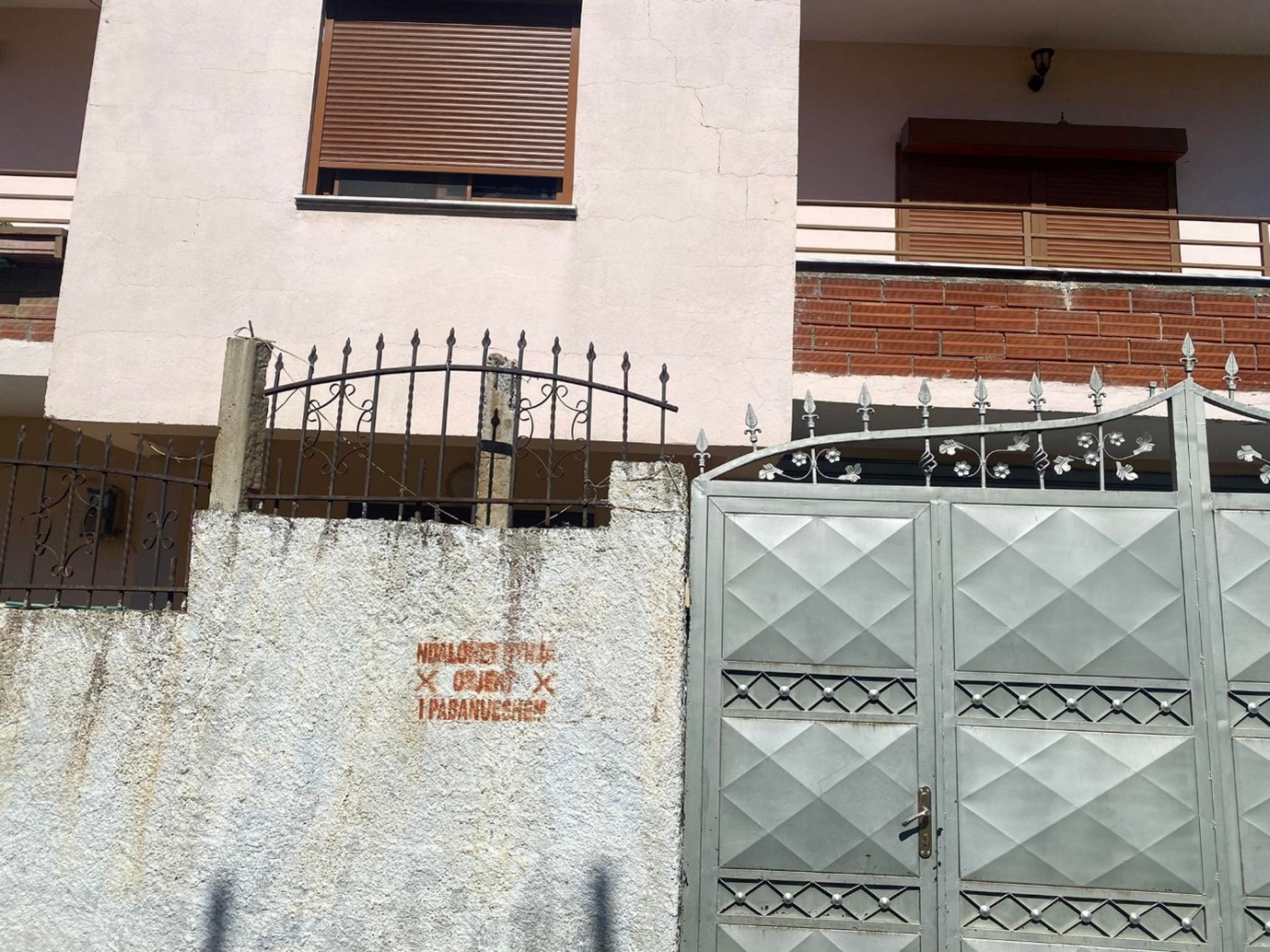 Damaged buildings with a no-entry sign were numerous in Marikaj. 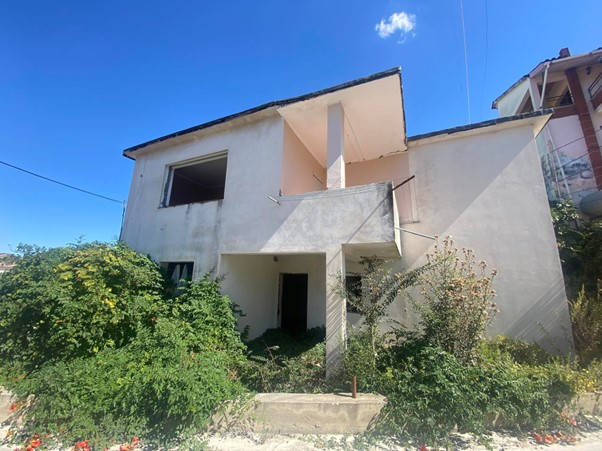 “People have fled to rent, they have lost hope that they will get their houses again. It’s been three years, we stayed on the streets”, says a 55-year-old resident of Marikaj.

“People have fled to rent, they have lost hope that they will get their houses again. It’s been three years, we stayed on the streets”, says a 55-year-old resident of Marikaj. 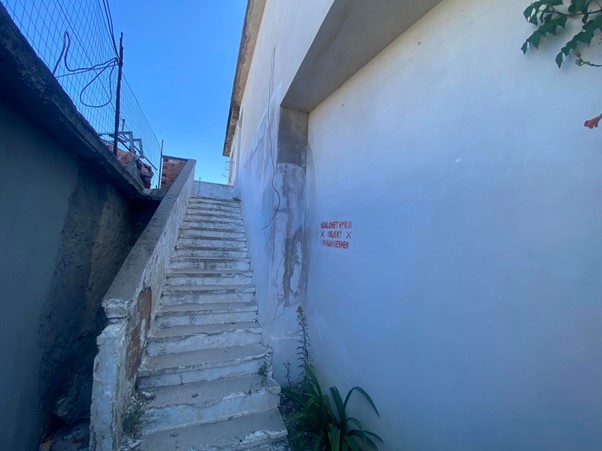 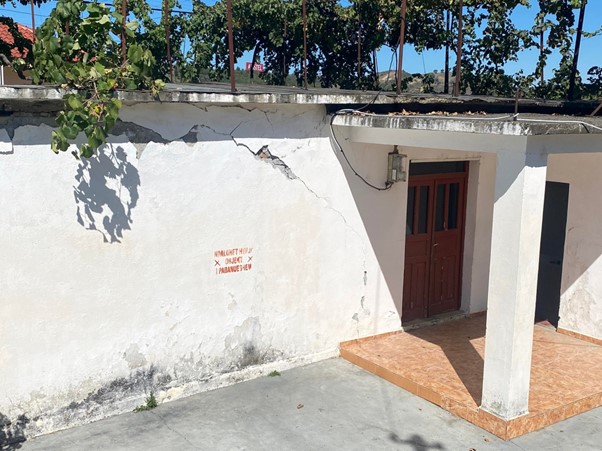 In the same situation were the residents of Marqinet, another village of Vora that was affected by the November 26 earthquake. They tell Faktoje that they have already been informed by the Municipality of Vora that they will first have to build the houses themselves, and then they will get reimbursed. The residents, however, had already agreed to have the houses built by the state.

“Now things have changed for us. We have been told that people will be given money to build their houses, but we don’t know when. There are 14 of us in the family, including two sons, two daughters-in-law and our grandchildren. We all live together now”, says Fadil Picari, resident of Marqinet. 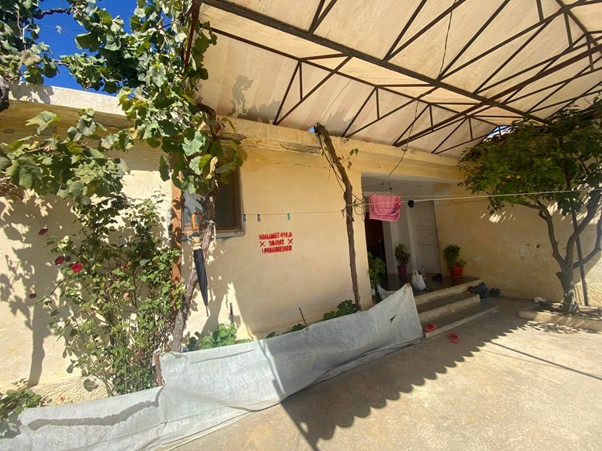 House damaged by the earthquake that has not yet collapsed, Marqinet, September 21, 2022

He further adds: “I have been disabled since 2012 and they are fooling us around. Now, they tell us that we need to first build our houses ourselves, but we had already agreed for the state to build it for us”.

Another resident of Marqinet village who lives in difficult conditions is Drita Hodo. The 41-year-old’s house was damaged by the earthquake 3 years ago, but even today the building has not collapsed. Today, she lives in a hut she built next to her damaged house, together with her children and husband. 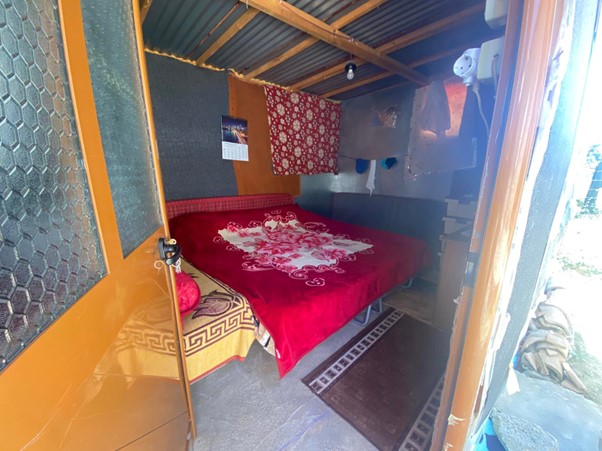 “Where can you rent a house for 200 thousand (old) lek?! Water and electricity must also be paid. My husband makes 320,000 lek. I have two  children in school and I can’t afford it, they have a lot of expenses. I was forced to build the hut and live here, together with the children”, says the 41-year-old woman. 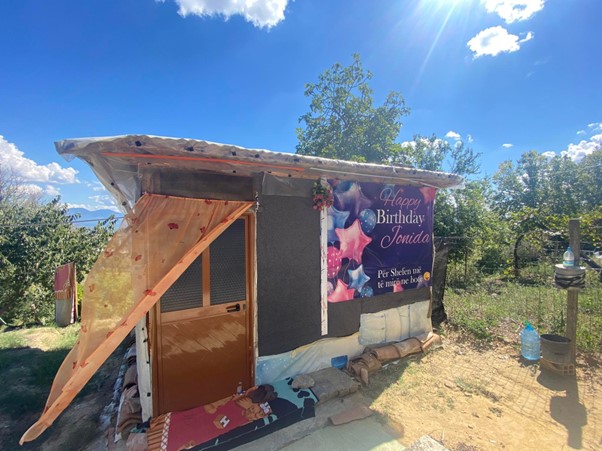 Drita does not have a kitchen to cook in, while the toilet was improvised outside in the yard.

“What kitchen? I don’t have one. We have no toilet inside either. We have just improvised one, outside”, says the mother of two. 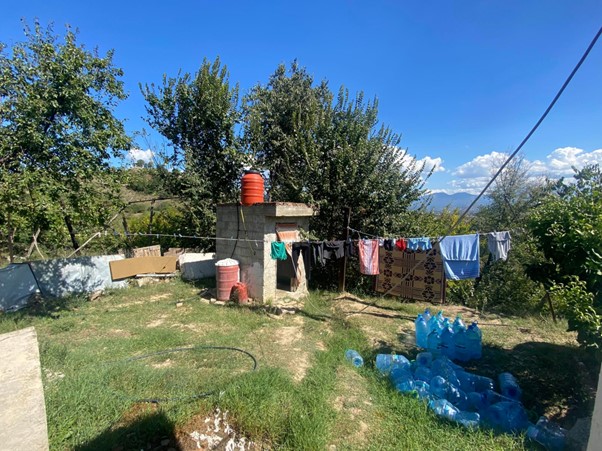 Regarding the process of reconstruction of private housing, we have addressed a request for information to the Municipality of Vora and we are waiting for a response from this institution, respecting the deadlines of the Law on the Right to Information.

Even a year ago, Faktoje reported that the damaged individual dwellings in the villages of Marikaj and Marqinet had not yet been demolished. This was officially confirmed for Faktoje by the Municipality of Vora, but also by residents of the area who lived in tents at the time.

According to the Decision of the Council of Ministers, the fund in the amount of ALL 851,809,204 ALL is transferred to the Municipality of Vora, for the reconstruction of 300 individual housing units, for those individuals who benefit from the reconstruction grants, whose dwellings are classified as objects that need to be reconstructed from scratch. 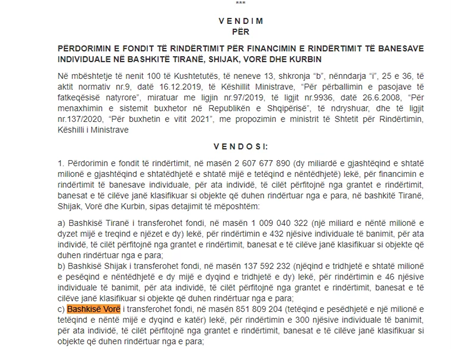 Screenshot of the Decision of the Council of Ministers

The building blocks in the center of Vora, the living ‘ghosts’ from the 2019 earthquake

During the verification we did in Vora on September 21st, we noticed that the building in the center of the city, scheduled for demolition, had not yet been demolished. Residents say that they strongly disagree about the expropriations, due to the low assessment per m2. 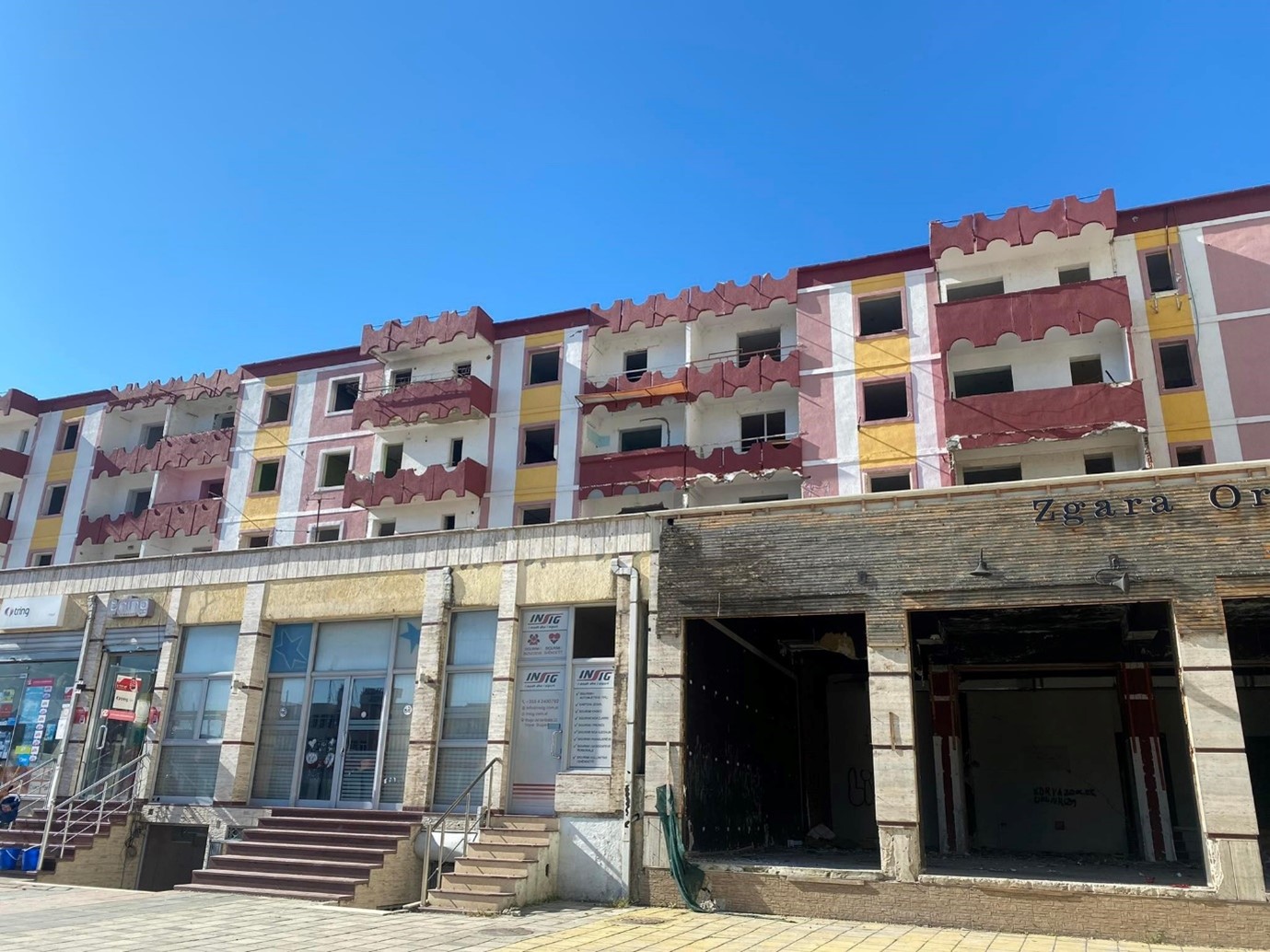 The damaged building block that has not yet been demolished, Vora, September 21st, 2022

Meanwhile, in Vora, the work on the construction of the buildings has not been completed, as the residents are waiting to move into their apartments. However, what is noticed is that in all the construction sites the signs with the start and end dates of the reconstruction projects have disappeared.

“There is still work to be done with building. We don’t know when we will move in, we are renting. We received the bonus, although once every two months”, says a woman in her 60s. 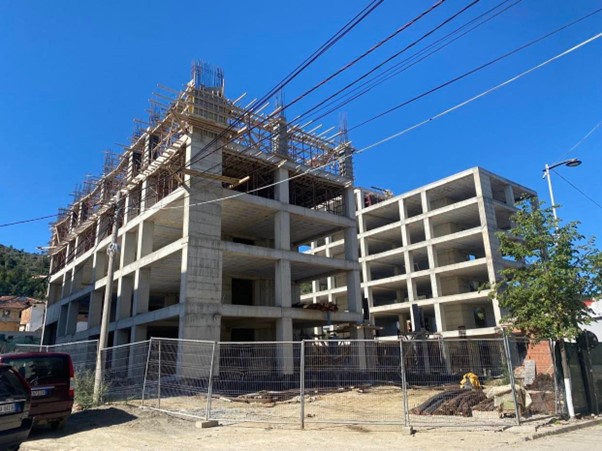 Buildings under construction in Vora, September 21, 2022

From the verification carried out and the information collected, we decided to categorize the promise of the municipality of Vora for the reconstruction of housing as an Unkept Promise.