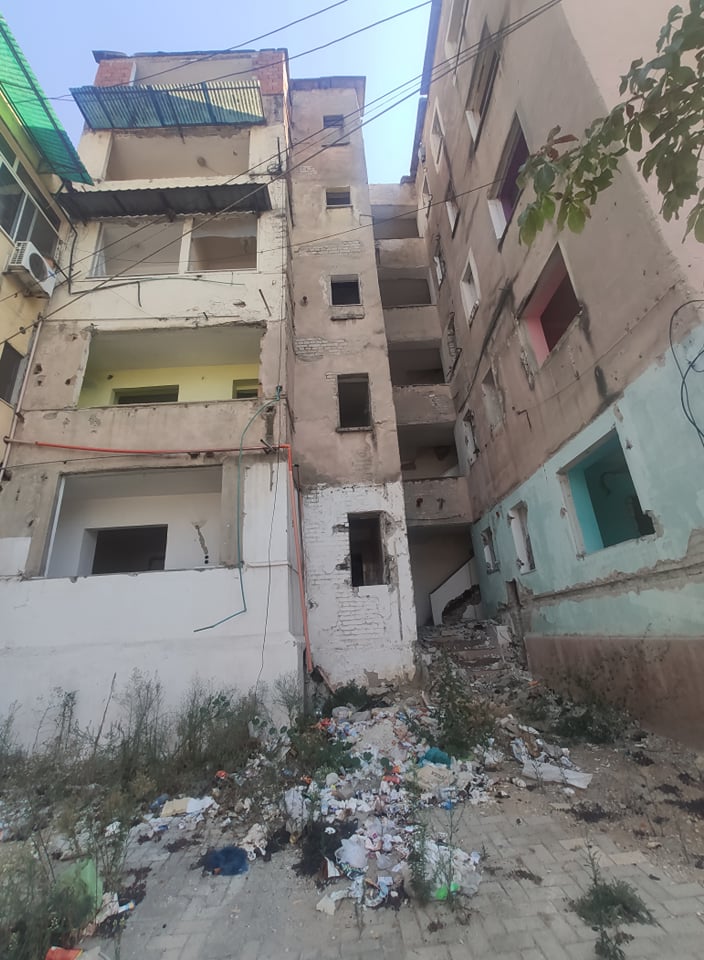 The demolition process for the buildings damaged by the earthquake of November 26, 2019 and declared as inhabitable in Kombinat is still being delayed and it’s not following deadlines. Faktoje carried out verifications on the field to see the progress of this process close and stated that a significant number of buildings still haven’t been demolished and some of the families still live in their apartments arguing that nobody has provided them with a contract to assure them that the buildings will be rebuild in the same ares.

For more than a year and a half after the November 26 earthquake in Kombinat, the demolition process of the buildings which were highly damaged to make way to reconstruction which is still lagging behind.

During the inspection on the field on 26.05.2021 the General Director of Co-ownership Facilities in the Municipality of Tirana, Aurel Çuko stated that 67 buildings are to be demolished in Kombinat and the process is expected to end in 3 months.

“Today we are in Kombinat, where we are moving forward with the demolition process, a process which has started long ago. Here we are at the building no. 155. It is a relatively big building and we think that we will complete the fist phase in Kombinat in a few days. In total we have 198 building, for which we have gotten detailed expert opinions. 111 have been demolished and 67 more are to be demolished only in the Kombinat area. I think that within the next 2-3 month we will complete the demolition process” – stated Çuko.

The minister of reconstruction, Arben Ahmetaj, stated that the demolition and cleaning of the inerts in the Kombinat area would begin in October 2020 and that by the end of October, they would lay the foundations for other buildings. As it was previously verified on the ground, the situation is “stuck”, since many of the buildings have not been demolished.

By the end of this deadline promised by Mr. Çuko, Faktoje sent a request for information to the Municipality of Tirana, where among other things it inquired about the number of buildings which were demolished in Tirana.

Request for information addressed to the Municipality of Tirana The response of the Municipality of Tirana for Faktoje.al

The Municipality of Tirana provided us with two lists. The first including 20 buildings to be demolished, which are all located in the Kombinat area, administrative unit no.6. List no.1 from the Municipality of Tirana for Faktoje.al

For the first list with 20 buildings, according to “Open Procurement” the contract and tender for the demolition and avoidance of construction waste for 11 buildings and for 9 buildings has been published in the Special Newsletter No. 48 dated 02 April 2021, whereas the demolition processes commenced in May. List No.2 sent by the Municipality of Tirana the buildings approved by the DMC for compulsory demolition.

The second list includes 28 buildings, a good part of which are located in the area of Kombinat, where also according to Open Procurement the tender for the demolition and avoidance of construction waste, for 15 buildings and 13 buildings was also issued in the Special Newsletter No. 133, dated September 7, 2021.

From the fact-checking of the information provided in the documents from Open Procurement it turns out that for 12 buildings, the contracts/tender issue etc. has been conducted in September this year, which means that the demolition process has not started yet.

The situation on the field

Faktoje checked on the field the state of the demolition of the assigned buildings, which then paves the way for their reconstruction. The residents admit that the process has begun, but there still are many buildings which have not been demolished.

“Until now only 11 buildings have been demolished and we don’t know how long the process will take. We don’t have any information, we don’t know what will happen. They have been playing with us since the earthquake, we’re not certain of what will happen. We don’t have any information, but if it is decided that the building will be demolished, why not inform us where it will be reconstructed, where our new residences will be.”-states one of the residents in Kombinat which wishes to remain anonymous. Image from the site of the demolished buildings in Kristo Nakuçi street, Kombinat. 15 September 2021 Image from the site of the demolished buildings in Kristo Nakuçi street, Kombinat. 15 September 2021

During the observation on the field we identified cases of the residents who still lived in building for which there isn’t a demolition decision yet.

“We received a notice that building 168/2 is to be demolished, but there is no information regarding where will we live, where will our buildings be rebuild, in which area. How can we trust and leave our apartments without any documentation or contract, we don’t even know in what area our houses will be. Very few families have left the buildings. The only information is that the palace will be demolished, they told us that we will receive 180 thousand ALL in rent bonuses and that we have to rent wherever we want and they will let us know where the new residences will be. They don’t guarantee that after the demolition of the building, we will still get our residence in this area. I have lived here for 45 years, how can they not inform us about the area where my new residence will be after the demolition”, stated for Faktoje Novruz Sekollari, as he emphasizes that he has not left the apartment even though the decision for the demolition of the building where he lives has arrived approximately 2 month ago. “I am a resident of building no.158. The building where I live was once categorized for demolition, then for repair and the situation is very unclear. We don’t have any information regarding the location where the buildings will be built. We still don’t know if the building will be demolished or not, in my building we have been told both repair or demolish. It only us too families stuck living in this building, the others have moved out”, states Lumturie Hysa, one of the residents of the area of Kombinat. Another concern for the residents in Kombinat is that some buildings which have been abandoned several months after the earthquake of November 26, still haven’t been demolished and some have become very problematic areas.

“They have been telling us for one year and a half that building 174 would be demolished, but it still hasn’t been demolished. The residents of this building have left approximately one year ago and have been accommodated in rented homes. It is an issue for us living here, because it has become a center of infection, prostitution or even drugs”, stated for Faktoje a resident of the area who wishes to remain anonymous. Based on the resident’s concern Faktoje addressed the Municipality of Tirana with another request for information dated 21.09.2021 to inquire whether they have been transparent with the residents regarding the location of the buildings which will be reconstructed. Until the publication of this article we still haven’t received a response from the Municipality of Tirana regarding the request for information and why they have violated the deadline for the reply.

Demolition paves the way for reconstruction

The government has planned the project “KombiArt” in the same area as the buildings to be demolished. This ambitious project, which is expected to fully destroy this neighborhood of Tirana was introduced on July 2020 by the mayor of Tirana through a 3D project. According to this plan, the surface of 1.5 million m2 in the area of Kombinat will be used for constructions aiming to accommodate 21 thousand individuals. Images from the 3D project of the Kombinat area

Wheras the demolition process for the buildings which were deemed inhabitable is moving forward with a very slow pace, the residents of Kombinat will have to wait for the major project of its reconstruction, whereas the government has vowed that the entire 3-year reconstruction process will be complete next spring. Vokshi: The government only reimbursed 40 dollars for COVID-19 patients