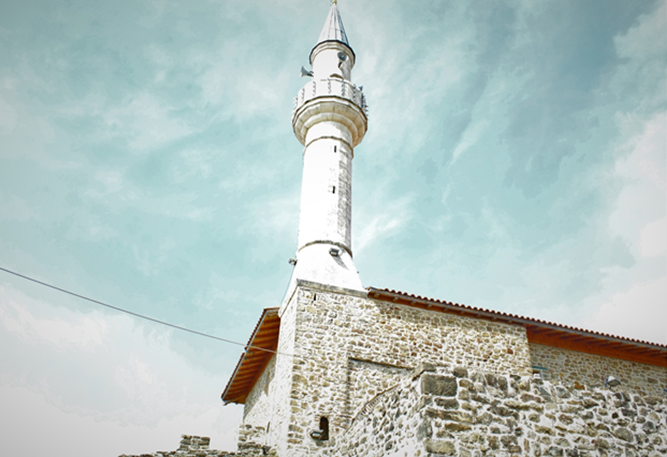 Despite being damaged by the 2019 earthquake, the Mosque at Preza Castle was not determined to be on the initial list of culture monuments to be restored. The National Cultural Heritage Institute (NCHI) later added this Mosque to the list of cultural monuments and spent ALL 22.000.000 on the study. The study took place over the course of 21 calendar days. NCHI breached the tender rules for Preza Castle, according to Faktoje, by deeming the competition fair with just one candidate. The Public Procurement Agency and NCHI have consistently failed to be transparent about contracts signed for the Mosque at Preza Castle that is not on the list of monuments damaged by the earthquake and is also open to the public.

Isuf Kaziu, a senior citizen who voluntarily oversees Mosque activities in Preza, walked us around the Mosque’s inside premises before calling the Athan. He took us to the Mosque’s southern wall, where, the plaster was cracked. He said that the Mosque was always open to religious practitioners and that religious rites were conducted as normal. They held sessions on Wednesdays with women and girls who learned the Quran and prayed. While practitioners went about their daily lives near Preza Mosque, which has evidence of the earthquake on its walls, NCHI high officials determined that the budget for 2021 would be allocated for a quick ALL 22.000.000 study. Faktoje visited on-site once the study was completed to verify that there were no restoration traces and that the Mosque’s restoration budgeting had not been finished.

If we travel back in time and check the Ministry of Culture’s list of damaged monuments, we’ll find the “Report on Damages Caused by the November 26, 2019 Earthquake on Cultural Heritage Assets and Areas” (pages 13, 14) on the link provided by Porta Vendore. The item “Preza” is only found once in this report, as follows: Preza Castle (The “Sahati” Tower and Northeastern Tower) Preza – and the projected cost of restoration is ALL 20,000,000.

It is unclear why the Ministry of Culture thought it was reasonable to sign a new contract for the study of Preza Mosque, which was not listed as an earthquake-damaged Mosque and whose costs exceeded the Castle rehabilitation project by ALL 2.000.000.

Faktoje filed a request for information with the Ministry of Culture, seeking Decision No. 478, dated 09.12.2020, approved by the National Council of Material Cultural Heritage (NCMCH). The NCMCH made the following judgment as a result of this decision: “The approval of the proposal for changing projects, in the framework of the reconstruction process for the service contract facilities: Protocol No. 181/11, dated 09.10.2020 for “Drafting the Project “Conservation Plan, Reinforcing and Restorative Interventions in 5 Cultural Heritage Assets” “Replacement of the “Sahati” Tower and the Northeastern Tower with the “Preza Castle Mosque”

As a result, the contract, from the prior year would be affected by the facility change. However, the budget for 2021 continues to fund a new contract, rather than amending the original contract, by continuing with a new procurement procedure and a new contract in 2021. The Cultural Heritage without Borders organization has issued an official response to Faktoje. Date: 20.07.2021

In a statement for Faktoje, Cultural Heritage without Borders stated that the restoration study for the Preza Castle was completed between July and December 2020, before the start of the restoration operations. As a result, the subject required 6 months to write the project, a significant difference from the Reconstruction Fund-financed project, which provided 75 calendar days for the 2020 study, but just 21 calendar days for the 2021 project.

Facilities at the Preza Castle – The Public Procurement Agency requires at least two candidates for each procurement and consultancy procedure.

In the case of Preza Castle facilities, the National Cultural Heritage Institute has decided to authorize the tender procedure with only one candidate. There is no required information on any of these two public institutions’ official websites, which is a transparency criterion.

Faktoje reviewed standard tender documents submitted and published by NCHI regarding the contract for drafting intervention projects on the damaged facilities. The procurement procedure used to select the contract winners was titled “Consultancy Services.”

Even though the scenario is identical for all of the procedures listed above, Faktoje is focused on the contract Drafting the Project “Conservation Plan, Reinforcing and Restorative Interventions in 5 Cultural Heritage Assets”, which was signed in 2020 and includes Preza Castle as one of the facilities.

The notice of the procedure’s start was issued on Bulletin No. 64, dated 08.09.2020, according to data from the Public Procurement Agency. The procedure type is “Consultancy Services”. For this procedure, Faktoje referred to standard tender documents (STD), which is carried out in two phases because it is a “Consultancy Service.” NCHI stated that “by the end of this phase, the qualified candidates must be included on a short list, which should comprise at least 1 (one) candidate,” based on the published STDs. Faktoje investigated and discovered the standard template for this type of procedure for contracting authorities on the PPA website. The minimum number of candidates who should be qualified for the second phase is indicated differently in standard documents published by PPA. “By the end of this phase, qualified candidates shall be included on a short list, which should comprise at least 2 (two) candidates,” they state. Faktoje resorted to the Public Procurement Agency for their view on the issue. According to the legislation on public procurement, “at least 2 (two) candidates are required in the first phase of this procurement procedure” for the “Consultancy Services” procedure, according to this institution’s official announcement to all contracting authorities. The contracting authority was unable to alter the standard requirements. The chosen procedure “Consultancy Service” requires a minimum of two qualified candidates in the second phase, not one, as NCHI specified for this procurement. This tendency was observed across all STD for all procurement procedures involving the design of restorative interventions projects which the “Consultancy Service” procedure was chosen for.

Faktoje submitted an official request to PPA in response to the NCHI’s procurement procedures, asking for information on these contracts, including “the limit fund, terms of reference, type of procedure, number of tender participants, winners, and tender documents.”

PPA directed us to the published Bulletins, where we found the procedure start announcement and the contract signature announcement, as seen above. In addition, PPA stated: Please find materials from the AK National Cultural Heritage Institute’s (NCHI) realization register for 2020 and 2021 attached, with information on the procured facility, limit fund, and contract value, and please refer to the National Cultural Heritage Institute (NCHI) for more detailed information.” The same information request was sent to NCHI, and despite PPA’s referral, NCHI did not answer to specific questions, instead directing us to their website. PPA provided this image to Faktoje.

Furthermore, Faktoje went to the procurement section of the NCHI website, where we found the 2020 Procurement Realization Register The register is represented below. The review revealed that the 2020 Realization Register does not include any of the public procurement procedures used by this contracting authority to design restorative projects in that year.

Is there a comparable model in Germany and Italy with the Media Agency, as stated by the Prime Minister?