How much is the restoration of Clock Tower and Dollma Tekke in Kruja costing? 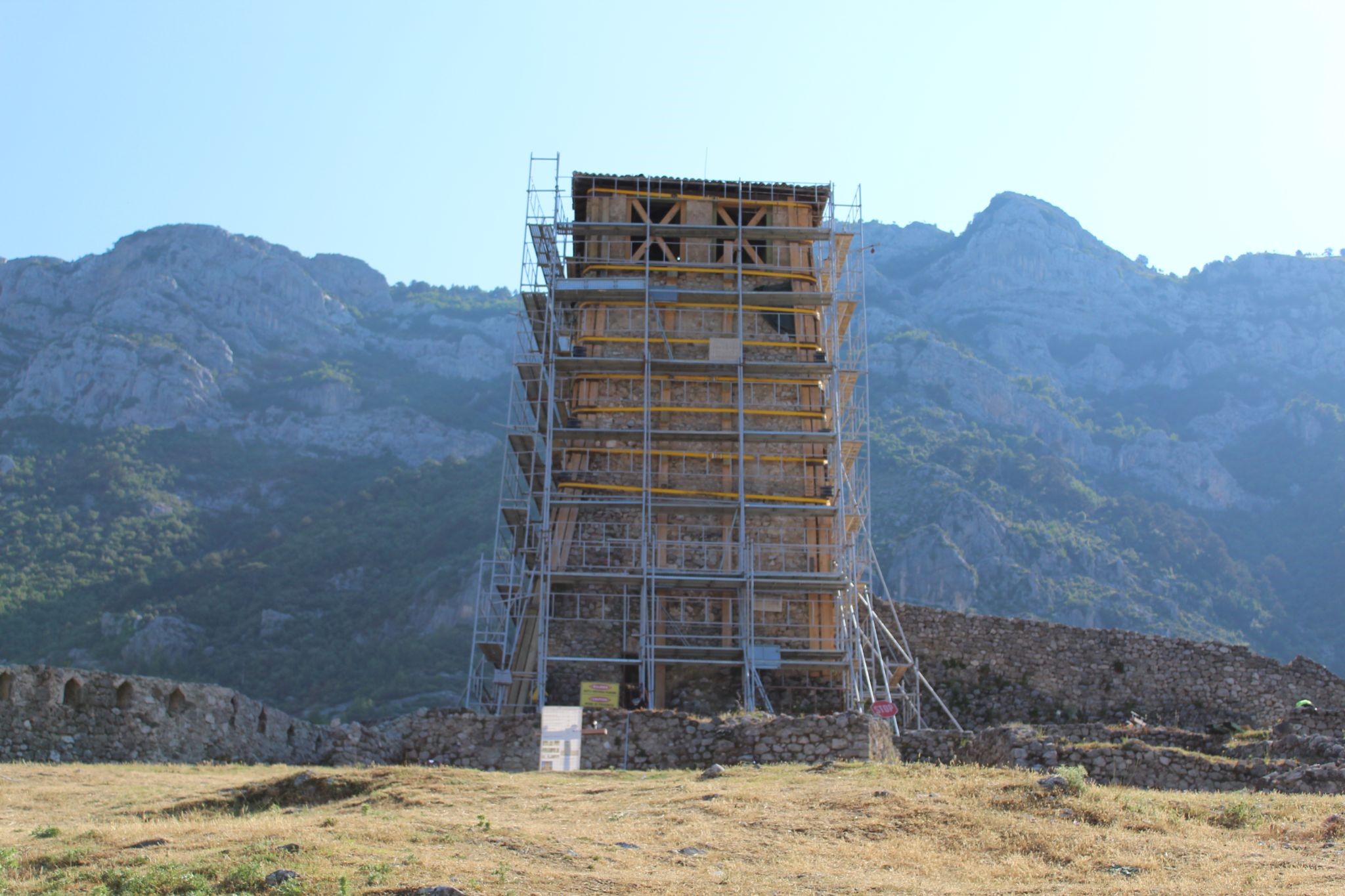 The cultural heritage of Kruja in the damage report published by the Ministry of Culture, is estimated to have suffered a total damage of 312.86 million ALL. The emergency intervention and restoration of two of the buildings, the Clock Tower and the Dollma Tekke, is being carried out by the “Cultural Heritage without Borders”, financed by the Ambassadors Fund, the Prince Klaus Fund and the Swedish Embassy. The restoration process is going on, but there is still no data on the restoration costs of these two historic buildings. In Kruja, on June 23, 2020, it was held the signing ceremony of the Memorandum of Understanding between the USA and Albania, in which it was awarded a grant of almost 800,000 dollars donated by the Ambassadors Fund for Cultural Heritage regarding the restoration of the fortifications in Kruja, Durres and Preza.

“This two-year project will start its works at Tower C in Durres and then it will continue with works at Dollma Tekke here in Kruja, at the Medieval Castle of Preza and at the Clock Tower of the Kruja Castle.” – said Ambassador Kim during the signing of the Memorandum of Understanding in the city of Kruja.

\The annual report published by the Cultural Institute for Cultural Heritage regarding their activities during 2020 explains the way how four of the damaged buildings will be beneficiaries of 800,000 dollar fund from the Ambassadors Fund for Cultural Heritage, in which two of them are located in Kruja. The report also explains that state institutions are not eligible for the grants provided by this program and due to this, the Ministry of Culture applied through the non-profit organization “Cultural Heritage without Borders”, which is the implementing unit for the restoration of these historical objects.

The Clock Tower of Kruja Castle The Watch Tower, also known as the Clock Tower in Kruja Castle, suffered severe damage from the devastating earthquake of 26 November.

According to the value stated in report of the Ministry of Culture, the total damage of the Kruja Castle is estimated at 290,000,000 ALL, including the Clock Tower and the fortification walls, from which 7,682,930 ALL are estimated for the emergency project and 20,300. 000 ALL for evaluation, study and design. The emergency project for Kruja Castle included the cooperation with the local units regarding the establishment of security perimeters and preventive signs by the Regional Cultural Directorate of Tirana. In addition to that, the technical maintenance staffs have carried out the partial dismantling of some of the structures which were endangered by falling on the wall of Kruja Castle. “Following the potential danger of the detachment of the rock mass below the Clock Tower at Kruja Castle, NICH has required the Municipality of Kruja to take measures to evacuate all residents and businesses located in the endangered area until a more detailed report of the situation be provided by the Albanian Geological Survey and the Army Engineering forces.” – it is stated in the report  of the Ministry of Culture.

The report of Ministry of Culture states the expectations of the restoration process costs.

Faktoje contacted the organization “Cultural Heritage without Borders” to learn more about the progress of the works. The response that we received from them stated that since the date of the commencement of works, on 31 March, 90% of the restoration volume has been completed. The works will last 6 months and they are expected to be completed in September 2021.

– Completion of the collapsed masonry structures

Moreover, in the response provided by “Cultural Heritage without Borders”, it is clarified that 3 funds are being used for the restoration of the Clock Tower: the Prince Klaus Fund, the Swedish Fund and the US Ambassadors Fund for Cultural Heritage. Illustrative photo of the official response from “Cultural Heritage without Borders”

We required from “Cultural Heritage without Borders” the amount of the estimated restoration value of each of the objects, but we did not receive an exact figure, as according to them it is impossible to be calculated, because the restoration process has “surprises” along the way.

In their response they present the values allocated by the donors for all 4 objects in question (Tower C in Durres, Clock Tower and Dollma Tekke in Kruja and Preza Castle) as well as for all the phases of works: – Ambassadors Fund for Cultural Heritage of USA – 800,000 Dollars – Sweden – approximately 90,000 Euros – Prince Claus Fund – approximately  66,000 Euros. Dollma Tekke is a cult monument that has suffered extensive damage to its structure.

In a video posted by Minister Margariti, she points out the major problems that are identified in this monument such as the cracks in the masonry structure and on the dome as well as the damage caused to the mural.

According to the value presented in the report of the Ministry of Culture, the total damage of the Dollma Tekke is estimated at an amount of 21,500,000 ALL. Based on this, it was approved the project in which 208,764 ALL were for the emergency project and 1,505,000 ALL were for assessment, study and design.

According to the report, the emergency restoration phase of the Dollma Tekke is estimated to cost 19,000 dollars, whereas the full restoration will cost 105,000 dollars.

According to “Cultural Heritage without Borders”, up to now have been completed the following works:

Currently they are working on:

– Reinforcement of the foundations

– Reinforcement of the dome, sails and walls

– Complete conservation of the mural

The works are foreseen to last 12 months and are expected to be completed in early March 2022.

There is no calculated value even for this object.

Faktoje spoke with Mr. Nedi Petri, the architect of the program of the organization “Cultural Heritage without Borders”, who explained us the unexpected events that occur during the execution of the works:

“A simple example, inter alia, is the case of the Dollma Tekke and its foundations. After doing the surveys very carefully, we realized that we were in an unknown situation, which we were not aware even from the information taken from the archives, because the foundations had never been seen carefully and in that depth, not even during the interventions made before the ’90s. Therefore, we had no clue, but we thought the situation would be somewhat normal, judging from our own experience. It turned out that the foundation walls were multi-level, not clear, and had wooden strips placed in between as it was usually the case with the upper walls. This development for us means at least double work, and it occurred just in the middle of the implementation of works, i.e.: complete documentation of the situation of the foundations, a special solution design for this part of the structure, maybe new analyzes,  discussion with the supervisors of the institute, the approval of project changes and slowdown of other works which are currently being carried out. The next surprise it will be when we uncover the dome from above, where we will see what its structure is and what kind of interventions have been exactly performed in the past. Similar situations have occurred even with the other 3 monuments, and they still continue to occur.” Photo of the information board at the entrance of Dollma Tekke, Kruja. Date: 06.07.2021

The following photos ascertain the conditions of the monument at the moment that Faktoje verified it in the field. Numerous cracks are visible on the walls,  on the windows, in the structure of the building and on its dome. The mural was severely damaged by cracks caused by fracturing and fragmentation. There were no signs of works in the Ethnographic Museum of Kruja, but from the outside we could see one of the cracks on the front wall. When Faktoje carried out field verifications, the Museum was locked.

According to the statement of Minister Margariti, the Ethnographic Museum of Kruja will be revived by UNOPS.

Faktoje submitted a Request for Information to the UNOPS presence in Albania, who informed us that in addition to the intervention that will be carried out to stabilize the structure: “The museological content of the exhibitions will be subjected to small adaptations, which will be accompanied by contemporary standard setting for continuing education for both buildings and their valuable artifacts”

Moreover, Kurcaj Bridge in Kruja is expected to be restored from the same fund. Currently, the works have not started in either of these two objects.

Million euros investments for plants but, the wastewater is still discharged into the sea

“Lungomare 2“, the multi-million ALL project dragged on due to lack of transparency