“Lungomare 2“, the multi-million ALL project dragged on due to lack of transparency 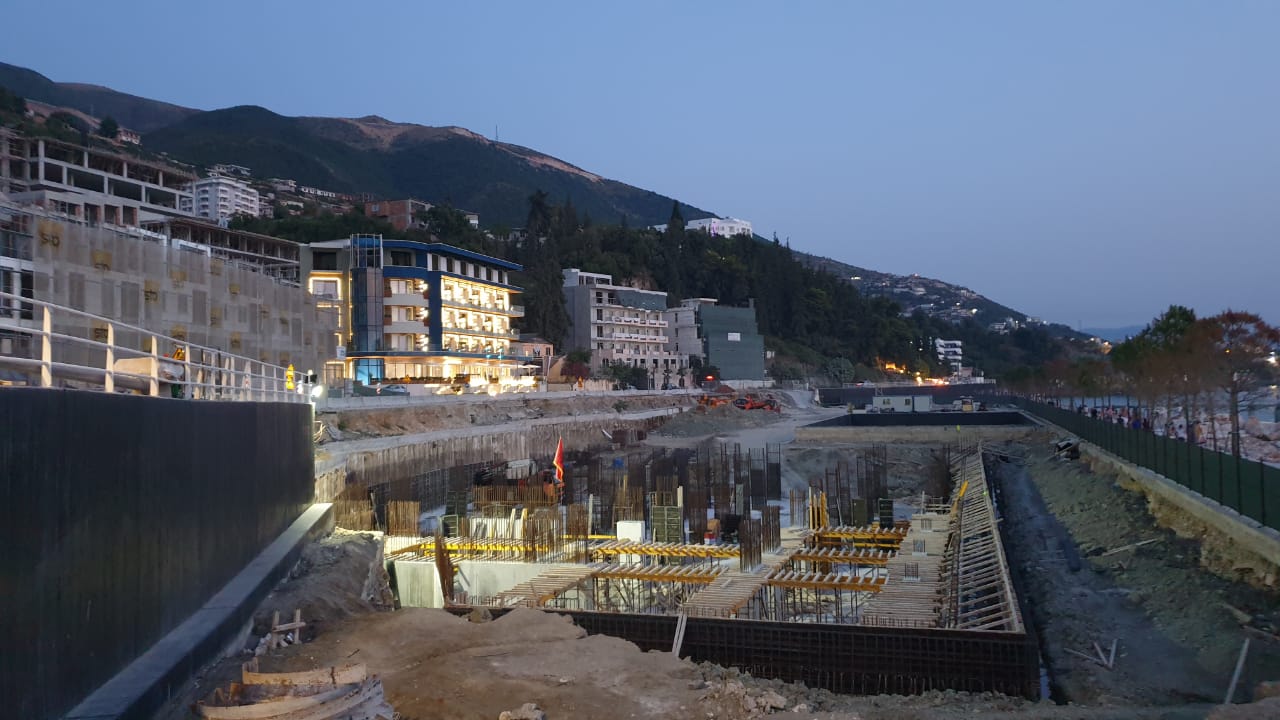 The “Lungomare 2” project, which costs over ALL 385 million and is regarded by the government as Vlora’s 5-star beach, is still under construction while the tourist season is at its peak, despite the fact that it should have been completed by April. The works along the segment connecting the Lungomare 1 promenade to the “Ujë i Ftohtë” tunnel are also dragging on due to changes to the project after the start of implementation on site. The lack of transparency is exacerbated further by the absence of the project table on the site, where several buildings were previously demolished and for which trials are still ongoing. Businesses in the area that are trying to recover from the pandemic crisis complain that the chaos is driving away customers.

Traveling to Vlora on the weekend, despite the promise of sun, sea, and relaxation, is not a good idea. When traveling through the Lungomare segment towards Radhima, you will encounter the chaos caused by the city’s construction sites, which are active during the day although it is the peak of tourist season.

The traffic is worse on the road segment from Ujë i Ftohtë to Orikum. The road segment has a single one-way lane, which results in a long line of vehicles that are sometimes obstructed by heavy machinery that work on the segment.

The line of vehicles going towards the beach during morning hours reaches several kilometers, however there are no tables on the site informing about the project, the works deadline or investment data, despite this being a legal obligation.

The project entails the construction of an underground parking lot with 160 spaces, an Olympic-size swimming pool that, following its construction, will undergo further intervention to expand as it does not meet the criteria to qualify as an Olympic-size swimming pool; a children’s pool, a promenade by the seaside and natural beaches, which are planned to be accessed through stairs from the road and nearby hotels. The project was first introduced during a public speech by Vlora Mayor Dritan Leli , who announced the investment of EUR 4 million. However, since then the project has not been completely published on the official website of the Municipality. The designing of Lungomare 2 was entrusted to the Greek company “Thymio Papayannis and Associates” sa & “Technical Planning & Development”, which was declared the winner of the international competition, with an investment of ALL 24.5 million, excluding VAT.

The winning company of the tender for the road construction at a value of  ALL 385,173,305 (approximately EUR 4 million) excluding VAT, is “Fusha shpk” (the ADF document link in PDF). The tender documents stated that the works, which would begin in October 2019, would be completed in 18 months. “The upcoming summer season in Vlora will include well-planned public spaces, elevating the city and its coastline to the level of other international vacation destinations.”

During an on-site inspection on May 1, 2020, with Mayor Dritan Leli, the implementation engineers told the Prime Minister that roughly 10% of the works were completed, while only one year remained from the project deadline.

On May 2, 2021, when “Lungomare 2” should have been completed, Prime Minister Rama conducted another inspection of the works that were far from completion.

“We should close the area off during the season in order for the works to continue. We should fence it off with panels in order to prevent any interference and to allow for the completion of the remaining works. We do not have to wait for the municipality to come around”- the Prime Minister said, accompanied by Vlora Deputy Mayor Afrim Qendro and the head of works from Fusha company.

On May 4, the ADF announced on its official website that the works for the “Lungomare 2” project were 90% completed. However, based on the fact-checking conducted by “Faktoje”, the area remains chaotic as of the last week of July, the peak of tourist season. In order to find out the current stage of works for the “Lungomare 2” project and why the project table is not present on the site, we addressed Vlora Municipality as the beneficiary entity. The official reply provided that the works being dragged on is a result of the changes to the original project by decision of the NTC. As regards the lack of the table of works, the Municipality provided an excuse. “In reply to your request for information sent over e-mail and recorded by the Municipality as the Entry with Prot. No .10669, dated 15.07.2021, regarding the Construction Permit for the scope of “Continuation of Lungomare – Southern Segment from the Sports fields to the Tunnel”, we hereby explain as follows:

Based on the verification on-site, we concluded that, as of the publication of this article, the table of works is yet to be displayed on the Lungomare 2 site. Meanwhile, the Ministry of Infrastructure and Energy has yet to reply to the request for information concerning the progress of the “Lungomare 2” project.

In its initial introduction, the Lungomare 2 project was met with harsh objections by business entities and inhabitants of Radhima and Orikum, whose buildings were demolished and disqualified from the legalization process prior to the design process commencement and without knowing which actual buildings inhibited the project’s implementation. According to the ADF, the project implementation unit, the Project underwent several public consultations. However, the residents who held ownership documents commenced a legal battle to prevent the implementation of the decision to demolish the buildings and to object to the expropriation amount.

Despite the initiated trials, the final presentation by the design company shows that the project affects only a small number of buildings, while the works on the Tunnel-Orikum road segment are yet to commence.

This situation is causing problems for tourism, as it is involving businesses that are struggling to survive the grave consequences of the pandemic.

According to Orgest Hasani, the chief host of a restaurant near the sports fields in Ujë i Ftohtë, traffic was obstructed for nearly three weeks in mid-May of this year.

“Restaurants like ours near the entrance section were not affected to the extent that others were. The roads were closed for several days. No one would drive this way. Currently we are facing high traffic, which has become the norm in this area“– he stated to “Faktoje”.

During the pandemic, in the area permitted for construction in the urban plan, there were several investments for construction on the national road, mainly hotels and restaurants, in hopes that the 2021 season would enable the area to overcome the crisis resulting from the pandemic. However, the dragging on of works and the chaos caused by the project that should have already been completed, is affecting the expectations of businesses. Clients are not visiting due to the noise and surrounding disarray, as well as due to the lack of parking spaces. The administrator of a hotel unit who opted to remain anonymous stated to “Faktoje” that they are afraid of the reactions of vacationers, particularly those who booked online, when they find out what the situation is like as a result of the area becoming a construction site.

“Of course the revenue has decreased“- he stated irritated. The lack of optimal revenue has brought about a chain reaction in the economy. According to Ervin Sota, a wine distributor, this tourist season in the area will be too difficult for tour operators. “Many opened their business following considerable investment. The profits in the area are similar to those during winter when there were no tourists. This affects the entire economy chain” -Mr. Sota said concernedly. According to several residents in the area, the project is altering the natural coastline in the area of Lungomare 2. Arben Abazaj, a citizen passionate about swimming and a regular visitor of the beach, stated:

Even God would have thought twice before destroying what nature has masterfully created. It is impossible to sunbathe by the sea during the year because the beach has become quite narrow and the waves throw you against concrete. This does not really concern them, as they only need the beach during summer.”

How much is the restoration of Clock Tower and Dollma Tekke in Kruja costing?

Are summer health centers being utilized to detect COVID-19?