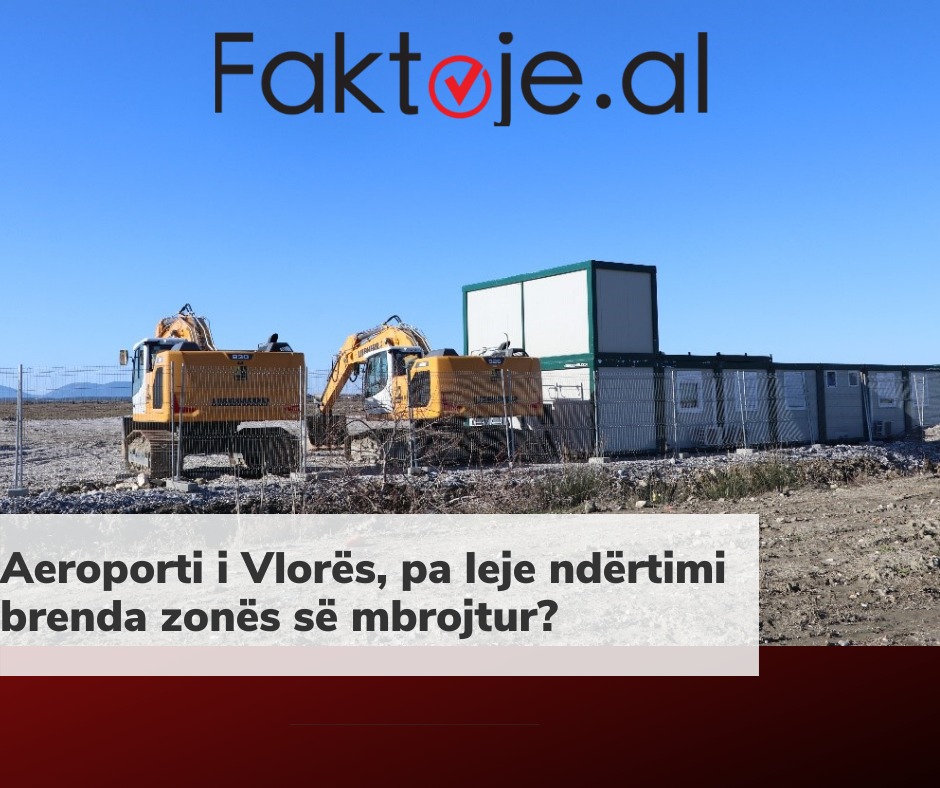 In late January, the Minister of Environment Mirela Kumbaro stated that all laws were abided regarding the Airport of Vlora. However, Faktoje’s investigation showed that the airport is being built inside an environmental protected area while it has not been granted a construction permit. According to the experts that are monitoring the implementation of this project, in order to fix this illegal situation the government is preparing a DCM which foresees the removal from the Protected Area map of the area in which the airport will be built, where except for the airport tourist resorts will also be built.

“The Decision of the National Territory Council has issued the developmental permit still is an ongoing process, but in every step we have stood by all procedures of Albanian laws either regarding public consultations or environmental impact assessments”- stated the Minister of Tourism and Environment Mirela Kumbaro on the construction of the Airport of Vlora on January 26, this year when asked by the media after a meeting of the Council of Ministers.

Based on this statement, Faktoje decided to investigate firstly by analyzing what is happening in the area where the international airport of Vlora is meant to be built.

As previously announced on November 28, 2021, Flag Day in Albania the works on the airport started, which was also confirmed by a report from Faktoje on the same day. Prime Minister Edi Rama and Minister of Infrastructure and Energy of Albania both explained the process of the start of the works and continuity of the works. On an investigation, one day before the inauguration on November 27, 2021 Faktoje found heavy vehicles and containers on the ground.

Over two months after the start of the works, on January 31, 2022 we revisited the site where we found that the works had come to a halt. Moreover, on the day of the investigation the heavy vehicles were parked and there weren’t any workers. The only person we were able to communicate with was the site’s guard, who informed us that no works were conducted during January and they are expected to start in February.

Putting the works at a stop has made it evident that environmental experts are monitoring the construction process for the airport of Vlora.

“Currently the project’s status is ‘under construction’; the site has been set up, but from the updated information it turns out that several trucks and other machinery have been transferred and still haven’t started the construction process.”- the experts’ stress.

While Prime Minister Edi Rama inaugurated the start of the works for the Airport of Vlora, twenty environmental organizations reported of ‘illegal and clientelistic procedures’ and asked to stop the construction plans in the protected area. When faced with the government’s argument that the airport will be built within the existing footprint of an aerodrome used before the ‘90s within the ‘Delta wetland complex of Vjosa river – Narta Lagoon’ which has been declared a Protected Landscape Area (Category V) according to the Albania legislation in DCM No. 680, dated 22.10.2004. Moreover, the area also enjoys other protection statuses based on international legislation. According to environmental experts, the Protected Landscape Vjosa-Narta serves as a corridor for the migration of birds through the Adriatic which move from the north of the globe towards the south in Africa. The lagoon its well-known for its flamingos as well as other birds. In theprogress report of the European Commission there are critics about the fact that the said project is planned to be built within the Protected Area. “In order to avoid this, the Government is designing a new DCM which foresees the removal of the Protected Area status for the area in which the airport is supposed to be situated and along with it a significant amount of space in which huge tourist resorts are meant to be built. The new decision which is expected to be approved within February 2022 is in fact part of a inclusive process of review of the Protected Areas which began in August 2019 and which has often been contested and critiqued” – state the environmental experts.

According to Faktoje’s investigation, until the publication of this article no decisions have been made by the Council of Ministers regarding this issue.

Has a permit been issued for the construction of the Vlora Airport?

“Even though the Government has tried to curate the inauguration event in details, there is actually a substantial stalemate concerning the non-compliance with legal procedure since the Environmental Statement issued by MoTE and NEA is dated 09.12.2021 and the project still does not have a valid construction permit.

Furthermore, the Vjosa-Narta Protected Landscape is object to an urban plan that foresees the construction of an airport as well as some huge tourist resorts.” – states the fact sheet “The Vlora Airport – A megaproject at the heart of a Protected Area”

Faktoje addressed NITS with an official request for information asking to know if this institution is in possession of the documentation according to which the company claims to build the new airport. NITS has not responded to this request.

Impact on the residents and species that live in the protected area.

Based on the data provided to Faktoje after a consultation with experts of the field and based on the official data which were published, it is estimated that the National Airport of Vlora, the great tourist developments and the additional urban infrastructure will cover up to 3 000 hectares or 15% of the actual surface of the protected area.

Environmental experts fear that the approved and planned constructions will have an irreversible impact on the biodiversity and the sustainability of ecosystems of the Vjosa-Narta complex, as well as social and economic impacts, besides air and acoustics pollution. Faktoje asked for the opinion of a group of environmental experts regarding the compliance with the respective laws, including the laws on public consultation and transparency as stated by Minister Kumbaro in relation to the Airport of Vlora on January 26.

“Both the EASIA (ENVIRONMENTAL AND SOCIAL IMPACT ASSESSMENT) on the Airport and the SEA (Strategic Environmental Assessment) on the urban plan were made public at the last moment and did not allow time for stakeholders and non-governmental organizations to be included in the required public discussions.” – state the experts who have raised some questions in regard to the EIA report which according to them does not provide answers on the following key matters.

Does the project have a significant impact on the Vjosa – Narta area?

Çuçi- A 150% salary increase starting from January 2022 for policemen who work away from their residence.