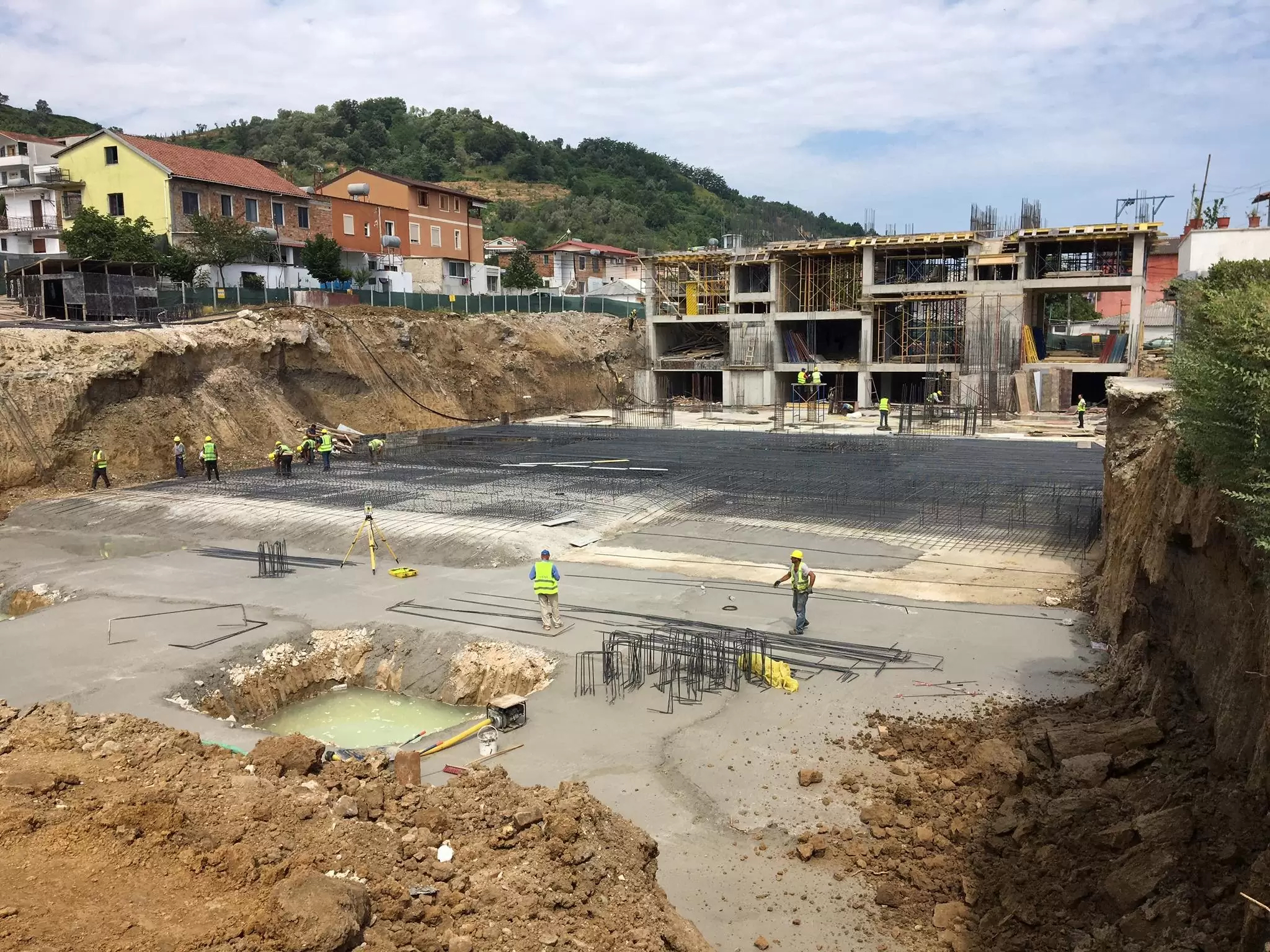 In Vora Municipality, one of the areas most affected by the earthquake of November 26, 2019, was promised that the removal of all inert materials and the construction of 404 new apartments would take place, only in the city area. Based on a verification conducted in early July, it results that many severely damaged buildings have yet to be demolished, there are still areas without removed inert materials and the construction of collective dwellings is far behind. Meanwhile, the construction site lacks information tables despite it being a legal obligation.

“Here in the city area of Vora there are 404 apartments in collective dwellings that will be constructed and will commence in the first 10 days of October” – Minister of State for Reconstruction Arben Ahmetaj stated during the inspection of the area together with Prime Minister Rama in early September 2020.

In the beginning of this year, Prime Minister Edi Rama and Minister of State for Reconstruction Arben Ahmetaj were again in Vora, where the construction of collective dwellings had yet to commence, although it was supposed to take place in early October 2020.

“We are once again in the Municipality of Vora, which is the area where infrastructure and construction works will take place, concerning 8 buildings for 107 families. The infrastructure works have commenced today, while the lot of buildings was already procured, so it has concluded.” – Mr. Ahmetaj said.

In April 2021, “Faktoje” addressed a detailed request for information to the Municipality of Vora, which, inter alia, inquired on the number of collective dwellings that were being constructed in its territory. After the expiration of the deadlines set forth under the law “On right to information” “Faktoje” filed a complaint with the Office of the Coordinator for the Right to Information about the withholding of information by Vora Municipality. Complaint filed with the Commissioner for the Right to Information, May 11, 2021

“The number of collective dwellings being constructed in Vora Municipality are 5 (buildings) and there are a total of 11 buildings to be constructed.

In Vora Municipality/center there are 19 buildings that are out of order due to the earthquake of November 26, while 5 of them have yet to be demolished.”

In mid-June, “Faktoje” addressed a request for information to the Albanian Development Fund regarding the number of collective dwellings to be reconstructed in the municipalities affected by the earthquake of November 26.

“Please refer to the following summarized information by Municipality regarding the collective dwellings to be constructed. We wish to note that the information is similar in regards to values and is subject to change according to the requirements of Local Units. Vora Municipality has a total of 30 collective dwellings.” – is written, amongst others, in the reply of the ADF, the implementation unit in the reconstruction process.

Following Vora Municipality and ADF’s replies, “Faktoje” conducted an on-site verification in the first week of July concerning the progress of the reconstruction process in the city of Vora.

The first thing we noticed were the damaged buildings that were not yet demolished, as well as the presence of inert materials resulting from the demolition of the buildings damaged by the earthquake of November 26, 2019. Although it has been over a year and a half since the natural disaster, the majority of buildings in Vora Municipality (including its administrative units) have not been demolished, as also confirmed earlier by the current Mayor..

“There are 19 buildings to be demolished in Vora. Vora Municipality comprises two development zones: Vora and Marikaj and there were two hearings held during February” – he stated. Inert materials from the buildings demolished after the earthquake of November 26, 2019, Vora, July 7, 2021

The situation involving inert materials was similar to that of 3 months prior, when “Faktoje” conducted its verification in the same area. Inert materials from the buildings demolished after the earthquake of November 26, 2019

Following the observation, we visited the collective dwelling construction site, the works in which commenced nearly 6 months after the deadline claimed by the government. Based on the field observation, we concluded that the collective dwelling reconstruction process will require additional time to complete. Meanwhile, the construction site lacked information tables showcasing the deadline, the project value and other details, the publication of which constitutes a legal obligation.

In regards to the transparency of the reconstruction process, it appears to be lacking at the central level as well. The reconstruction fund that the government has planned for this year amounts to ALL 28 billion, out of the three-year period (2020-2022) total of ALL 62 billion. As of May of this year, according to official data, approximately 33% of such amount has been disbursed. Specifically, during January-May 2021, ALL 9,169 billion has been utilized from the reconstruction fund, but there are no actual data regarding which projects it was allocated to.