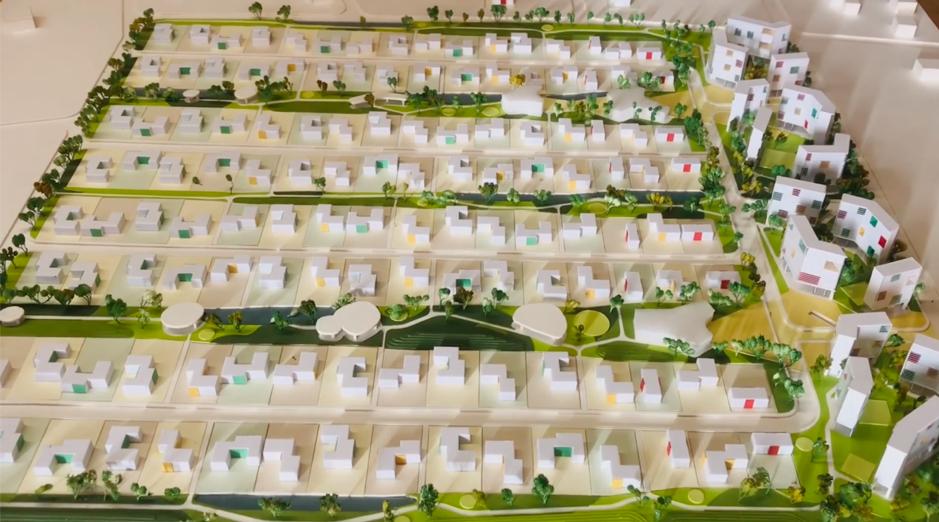 The reconstruction process aiming to provide shelter to thousands of people affected by the earthquake of November 26th is progressing slowly. Six months ago, the Minister of State for Reconstruction Mr. Ahmetaj, introduced the plan outlining that approximately 1200 homeless inhabitants in Fushë-Kruja would have their new homes ready by mid-December 2020. As of today, more than a month after the expiry of the promised date, none of the houses is reconstructed.

On July 22nd, the Minister of State for Reconstruction, Mr. Arben Ahmetaj, informed on the progress of the process, touching on Fushë-Kruja as well.

“The development zone in Fushë-Kruja will be one of the most beautiful ones, which will also serve as a model for others. It will be a combination of individual dwellings and low buildings…”-stated Mr. Ahmetaj.

According to the introduced plan, 128 individual dwellings and 100 collective dwellings will be constructed in Fushë-Kruja, divided into fifteen 5-story buildings, planned to be completed by December 17th, 2020. The value of the contract, the implementing unit of which is the Albanian Development Fund, is over ALL 278 millions for a construction area that exceeds 100 thousand square meters. Taken from the presentation of Minister Ahmetaj, July 22nd, 2020

On October 12th, Prime Minister Rama visited Fushë-Kruja for an on-site inspection of the construction works for the individual dwellings and the buildings, accompanied by Mr. Dritan Agolli ADF CEO and the Mayor of Kruja, Mr. Artur Bushi.

Meanwhile, the commencement of the apartment building construction is in the final procedure stage.” – stated the Mayor of Kruja.

The ADF CEO, Mr. Agolli, clarified that they hoped that “until next month (mid-November) they would open the site for the construction of the buildings.”

However, even in mid-November 2020, the construction of the buildings had not started, as evidenced on a Facebook post by Prime Minister Rama. Prime Minister Rama, together with Minister Ahmetaj, returned to Fushë-Kruja on November  27th, 2020, exactly one year after the devastating earthquake. On that date, none of the individual dwellings had been completed, but this did not deter the Minister of State for Reconstruction from ‘renewing’ the next deadline.

“We are close to finishing. By the end of the year, 50 of these dwellings will be completed and they will be handed over to the owners.” -he stated.

As for the question asked by the Head of Government regarding the commencement of works for the buildings, Minister Ahmetaj responded:

“I believe it will be in two weeks, as we have to commission one final item with the Fund (ADF).”

At the end of the year, on December 29th, 2020, Minister Ahmetaj returned to the site of individual dwellings in Fushë-Kruja with Prime Minister Rama. Contrary to what he had promised previously, not only were the first 50 houses not completed but not even a single one had been finished.

“I believe that the work for these dwellings, together with the works for the other community accommodation facilities, will be completed by the end of March. They will be ready within March.” -he ensured. As regards the buildings, the works commencement deadline was again postponed to January 15th. The completion of the 100 collective dwellings to be organized into 15 buildings was also postponed from December 17th, as Minister Ahmetaj had stated in the beginning, to mid-July. However, the ‘responsibility relay’ for the next deadline passed from Minister Ahmetaj to Mayor Artur Bushi.

Despite the consecutive violations of the deadlines promised since July 22nd, 2020, Mr. Ahmetaj said:

On January 22nd, Prime Minister Rama issued the latest update from the reconstruction site in Fushë-Kruja, where it was obvious that the works were still under way and no individual dwelling had been completed.