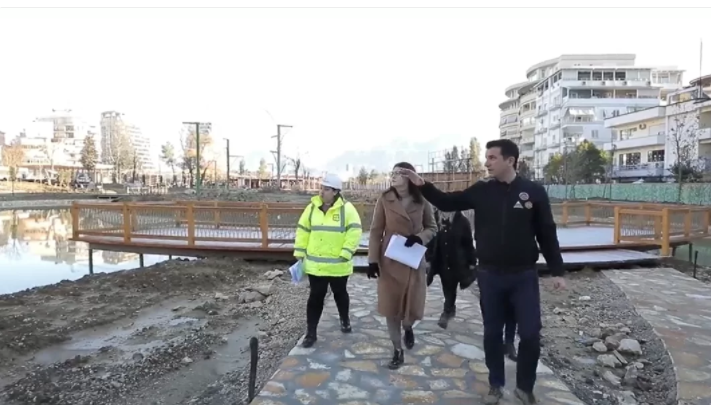 During Christmas and New Year holidays, mayor Erion Veliaj announced the delay of the works for the revitalization of the Zoo. The public statement from Veliaj came one week after Faktoje officially addressed the Municipality requiring information on the deadline of the works. From a previous fact-checking on the ground in the middle of December, Faktoje journalists found that it would not be possible to complete works by the end of this year even though the Municipality had confirmed that according to the contract the project should end within December 2021.

“Look we waited 30 years, so I think 3 more months are not a big deal. Now that we have these new cages for the lions it is best that we take all the time we need.” – stated mayor Erion Veliaj while inspecting the works on the field, only a few days before the previously promised deadline of December 31 for the completion of the Zoo expired.

“I think that since most of it is done, we will have to postpone it a bit due to the rain as well as the exotic animals. I think we should take it slow, so that everything is in place and 100% functional, rather than hurry up to meet the deadline at the end of the year.” – as justified mayor, who also addressed the executors of the project:

“If we continue with this rhythm, we’ll recover the days we lost due to the rain; will we be ready by summer or maybe earlier by Saint Valentine Day?”

His public statement came almost one week after Faktoje addressed an official request for information to the Municipality of Tirana requiring to know in what stage are the works on the Zoo.

Request for information addressed to the Municipality, December 16, 2021.

From a previous fact-checking on the ground in the middle of December, Faktoje journalists found that it would not be possible to complete works by the end of this month. The deadline for opening the Zoo in December was confirmed for Faktoje by the Municipality of Tirana through an official statement sent in September of this year. Response of the Municipality of Tirana, September 21, 2021

“The facility’s construction is nearing completion, and it will be finished by the deadline of December 2021. Kindly be informed that the contract did not stipulate that the works be completed on June 1, but rather it was the good will to do it on Children’s Day, before the deadline. Due to unanticipated works during the cleaning of the foundation, the date was missed.” – the Municipality stated on their reply to Faktoje in September

Previously in May of this year, the municipality of Tirana confirmed another deadline for the completion of the project.

“Around 60% of the work on the Zoological Park’s redesign has been completed. These works are scheduled to be completed on June 18, 2021, as per the contract deadline. ALL 739 908 795. 98 (VAT inclusive) is the total value of the undertaking contract.”- stated the response of May 7.

Response of the Municipality of Tirana sent to Faktoje on May 2021.

The 5 broken promises of mayor Veliaj regarding the Zoo!

One of the promises Mayor Veliaj made during his first term in office in 2015 was to revitalize the new Zoological Park.

On October 13, 2018, he said that construction of the Zoological Park would begin the following year.

“We’ll put some money aside to help fund the new Zoological Park. We’re going to redesign it and make it one of the most beautiful in our region. We’ll link the Zoological Park and Botanic Garden together so that flora and fauna may coexist.” – three years ago, Veliaj promised.

Mr. Veliaj outlined the project and announced its launch in 2020.

In April 2021, mayor Veliaj gave the good news for the community and especially for the children:

“Now that June 1 is just around the corner, the Zoo will be a fantastic surprise for the children.”

In Tirana, no space 'can be found' for the Circus Tent

The repair of village roads in Tirana had been promised, but the earthquake and pandemic 'shifted' the priority