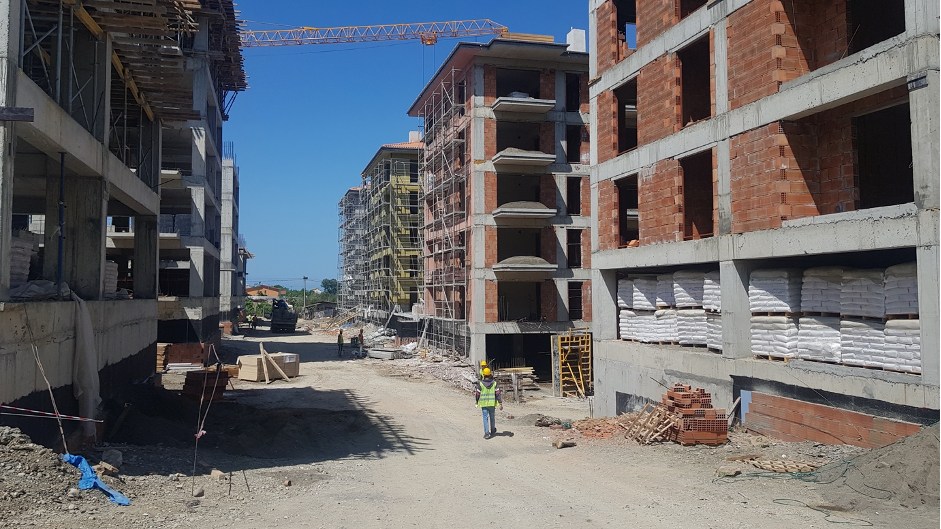 Approximately one and a half years after the earthquake of November 26, 2019, the reconstruction works for the new neighborhood in Laç continue. Although this project is being carried out by the Turkish state agency TOKI, in September 2020, the Minister for Reconstruction Arben Ahmetaj ensured that half of the apartments would be completed by March 2021. “Faktoje” visited Laç at the beginning of May, more than a month after the deadline expiry, but none of the apartments had been completed.

On September 20, 2020, the Minister for Reconstruction Ahmetaj was in Laç, where the reconstruction site of the new neighborhood was turned into a construction site. He ensured the citizens of Laç that half of the 524 apartments included in the project would be completed by March of this year.

“On behalf of the Government and the Prime Minister, I assure the residents of Laç that one of the sites will be ready by March, meaning that half of the apartments will be ready, whereas the rest consisting of the second site, part of the same project, will be ready within 3-4 months after the completion of the first step.” – Minister Ahmetaj said. Minister Ahmetaj at the construction site in Laç on September 20

“Faktoje” visited Laç on May 6, 2021 to see the progress of the works, more than a month after the expiry of the deadline set by Minister Ahmetaj. No apartment was completed at the new neighborhood site in Laç, where 630 workers were working. We talked to one of the engineers at the construction area, who provided details on the buildings that will be constructed, but he refused to give a timeframe as to when the apartments would be completed. “524 apartments will be constructed here, along with 37 stores that will be arranged into a commercial unit, while a part of them will be incorporated into the first floors of the buildings. The apartments will be divided into 13 blocks or units. We do not know yet when the works will conclude, but the teams are working at maximum capacity to complete them as soon as possible.” – the engineer, who wished to remain anonymous, told “Faktoje”. He also told “Faktoje” that the apartments in the area would not be completed separately, but the whole project would be completed at the same time.

“Everything will be opened at once. The project will be delivered as a whole.” – he concluded. Afterwards, we turned to Kurbin Municipality, which acts as the coordinating institution for the reconstruction process in the city of Laç. Municipality representatives confirmed the information we received at the site.

“None of the 524 apartments in the area under construction by the TOKI agency has yet been completed. Part of the apartments will be completed in August, while the rest will be completed in September. Upon completion in September, the families are expected to enter into the apartments, as they cannot enter sooner due to the site being still under process.” – the representative from Kurbin Municipality told “Faktoje”. Based on the information gathered on site and the official confirmations by Kurbin Municipality, we would categorize Minister Ahmetaj’s promise regarding the completion of the collective dwellings in Laç by March and unkept promise.