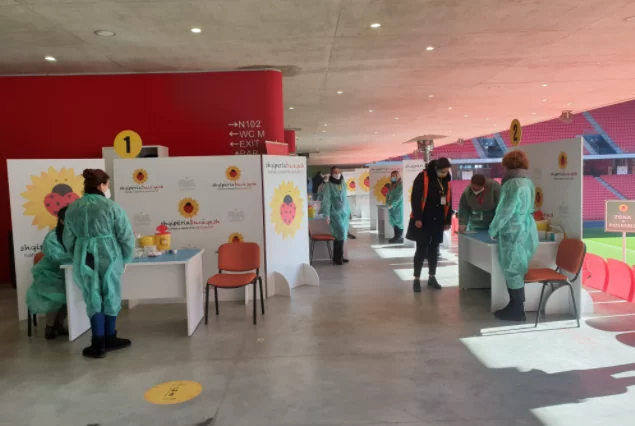 A whole vaccinated population or approximately 2.2 million individuals should have been vaccinated against Covid-19 by the end of February 2022. Official data of the Ministry of Health show that only 52% of the population has been vaccinated, thus acknowledging the failure of the commitment made during 25 April 2021 election campaign. Meanwhile, experts provide other figures, according to which it turns out that less than half of them received the anti-Covid vaccine, while analysing the reasons why the campaigns promoting vaccination did not meet expectations.

“We ensure vaccination of the whole population over 16 years old until February 2022″, is stated in the government program 2021-2025. Such promise was also articulated by the Minister of Health Mrs. Manastirliu on 11 March 2021 when invited to the “Opinion” show speaking for the full vaccination of population against Covid-19 which would be completed within 14 months (estimating that the vaccination campaign started in January 2021).

“Our ambitious plan is 14 months and we stick to it, because we have a very important element, we must not forget we have such as the capillary system throughout Albania that has given us the opportunity to vaccinate at a large extent, i.e., in every area and this is an inherited system.”- said Manastirliu on 11 March 2021.

As far as this government commitment is concerned, Faktoje initially addressed a request for information to the Ministry of Health and Social Protection on 7 February 2022. We received a response from this institution regarding vaccination figures, following a complaint made to the Commissioner for the Right to Information.

Through an official letter dated on 3 March arrived at Faktoje’s Offices on 4 March, the Ministry of Health clarifies that by 7 February 2022, 52% of the population has been vaccinated. Response of Ministry of Health Response to Faktoje

There have currently been more than 2.6 million applications made and while we continued with another process regarding the collection of all documentation of Albanian citizens vaccinated abroad, but resulting to have applied for the vaccine here being estimated in over 55 thousand citizens vaccinated abroad, but calculated in the total dose applications amounting approx. 2.7 million applications for Albanian citizens, enabling us to have a percentage of vaccine coverage with a single dose for the target population +16 years 59.3% and over 55% with two doses”-announced Minister Ogerta Manastirliu.

Regarding vaccination issues and how far the objective of the Ministry of Health has been met, Faktoje discussed with the Public Health Expert, Mr. Erion Dasho. The well-known doctor provides other vaccination figures of the population, emphasizing that in our country only 41% of the population are currently vaccinated with two doses. Dasho adds that the MoH target has failed, as the population is massively non-vaccinated.

“With 44% vaccinated with the first dose and 41% with the second dose, Albania is far from the Ministry of Health target and I think that this target has already failed, because February has passed and we see that the population is massively non-vaccinated.”

Analysing the reasons why the commitment to fully vaccinate the population against Covid-19 failed, Dasho argues as below:

“It could not have happened otherwise in the circumstances when we had a poorly conceived vaccination program starting with vaccines brought in complete secrecy, but without stating its origin. It was followed by a non-transparent vaccine purchase program, where prices were never declared and took media investigation  for the prices to be made public. The vaccination campaign took place at the same time with the electoral campaigns of the ruling party and, above all, vaccines provision originating in China.

Vaccines were never certified by the European EMA or the US FDA, i.e., they are vaccines with questioned validity and effectiveness. Under these circumstances, the vaccination campaign was designed to fail and can be called a complete failure in all respects”- explains Dasho.

“Purchase of other vaccines, either through Covax or through direct purchases seems meaningless to me, given that the Albanian population has refused vaccination. Undoubtedly, every vaccine arrival and purchase should be preceded by a campaign of the health promotion type where citizens are convinced of the usefulness of the vaccine, which is not questioned today.

The government must bring safe and qualitative vaccines and try to bridge the gap created between the population trust and what the government intends to achieve. However, in my personal opinion, Ministry of Health and Albanian Government find it impossible to regain the trust of the population. Such trust has been destroyed last year when the government left the Albanian citizens in the lurch turning their homes into giant hospitals and when the entire Albania was turned into a giant hospital where thousands of Albanians lost their lives. “I think that vaccines should continue to be applied based on the recommendations of prestigious international institutions.”

On 8 February, in a media interview, the Institute of Public Health Expert, Mrs. Iria Preza published some figures on the progress of vaccination in our country.

In August last year, Faktoje analysed through an article the factors that threatened the fulfilment of the government’s promise to vaccinate the entire population against Covid-19 within spring 2022. Since then, the expert Ilir Alimehmeti was sceptical about the deadline announced by the government.

“It depends on the definition of the word “conclusion”. Hence, if it refers to the percentage of the population, then it depends on how much this percentage is set. In Israel was observed that population vaccination at the level of 78% has not provided eradication of the epidemiological wave, but has provided reductions in severe cases. Thus, we need to discuss depending on the percentage. But, be careful at one element! If forced vaccination is decided, then many people will get fictitious vaccinations. Vaccine injectors will be agreed upon and marked as vaccinated, but the vaccine has actually been discarded and not injected. There are many reports that such a thing has happened during summer in Albania, especially from emigrants and people who wanted to travel, but we do not know what this percentage could be. Let’s hope it’s a low one. “However, if forced, this percentage shall be increased a lot and we will, in medium terms, risk many unfavourable situations.” – said the expert Mr. Alimehmeti for Faktoje in August 2021.

The government is currently still waiting for other contingents with anti-Covid vaccines within Covax system, however on the contrary the vaccinations pace has been steadily declining. If in October 2021, for example, 6-7 thousand vaccinations were reported in 24 hours, now they have dropped to approx. 2000 vaccinations per day.  The last update date from the Ministry of Health regarding the vaccination number was 2 March.