“Over 96% of family subscribers consume less than 800 kilowatts per month, and in the table that can be displayed, we have reflected the percentage of consumption distributed by kilowatts per family. In the meantime, this 4% of family subscribers constitutes 19% of the volume of domestic consumption.” – declared the Minister of Energy and Infrastructure Belinda Balluku during the presentation of the Social Resilience Package, where she announced the increase in the price of electricity. 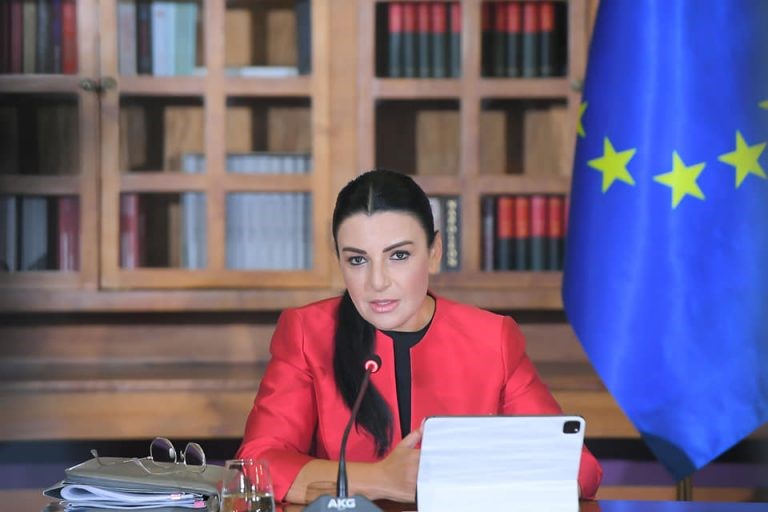 The minister also explained what the price would be for each kilowatt over the 800 kwh energy band and which will be applied from October.

“So, for every kilowatt over 800 kilowatts, the price that will be applied is 35 lek per kilowatt, plus 7 lek transmission and distribution fees, a total of 42 lek .” – clarified Balluku further, taking care not to include in the price the new 20% VAT, which actually brings the price of 1 kWh of energy to 50 ALL.

In other words, every family that today pays more than 9120 ALL for electricity per month (including VAT) will be affected by the price increase. We have to consider that the invoice below belongs to the month of June, where the need for energy expenditure for heating/cooling is insignificant. 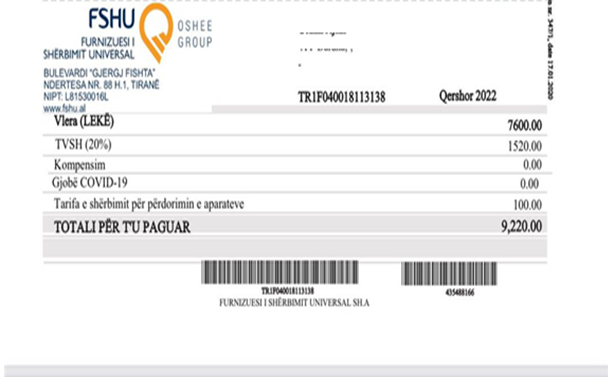 Referring to the data made public by the Ministry of Energy, the price increase affects 4% or about 48 thousand families, since 96% of family subscribers consume less than 800 kwh per month. 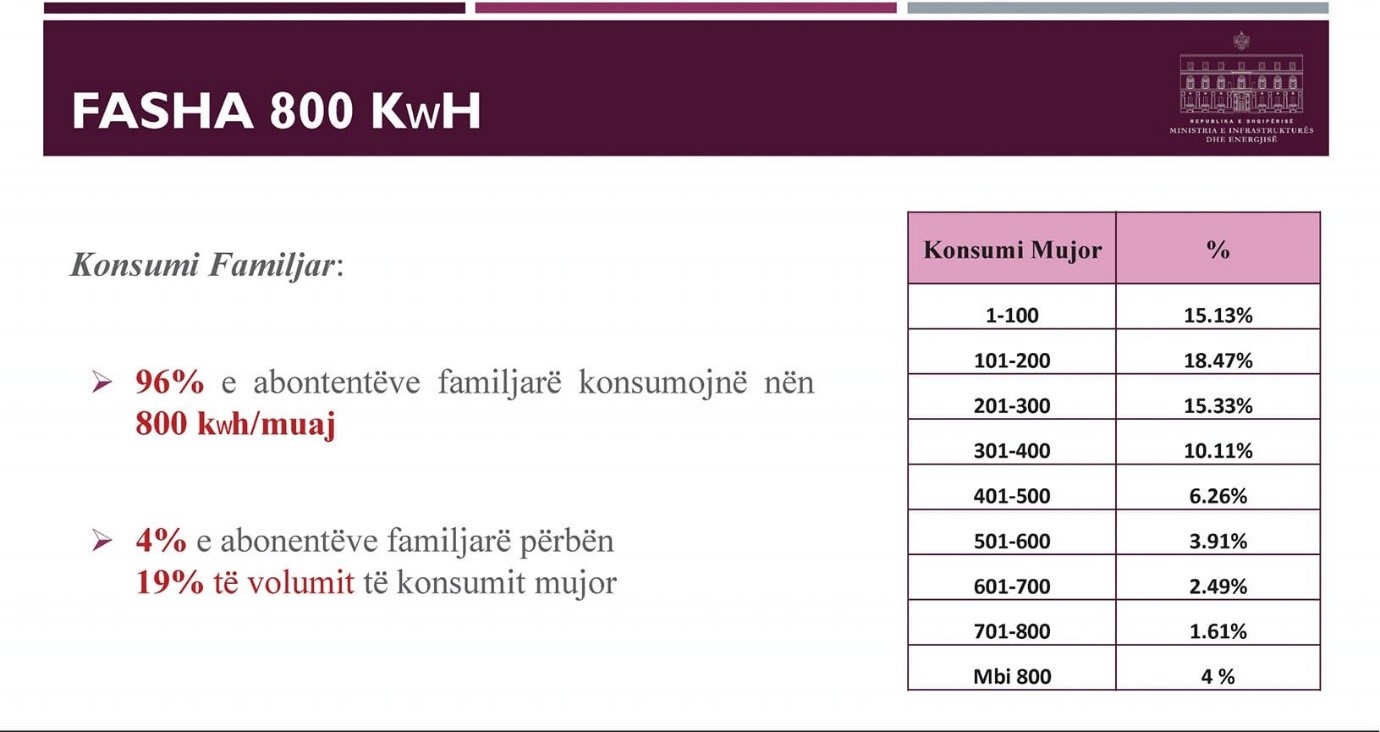 Faktoje has provided official electricity consumption data for the first 6 months of the year. 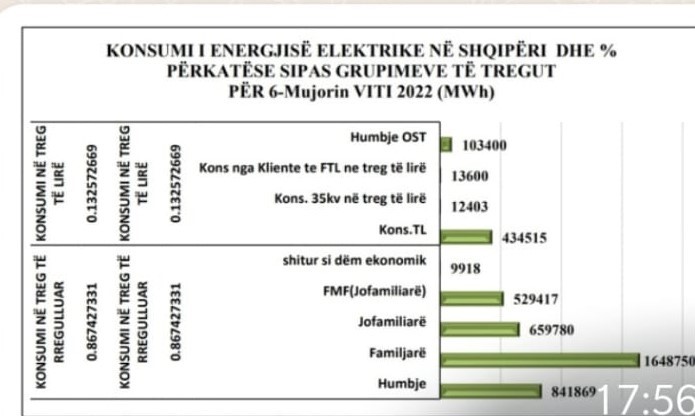 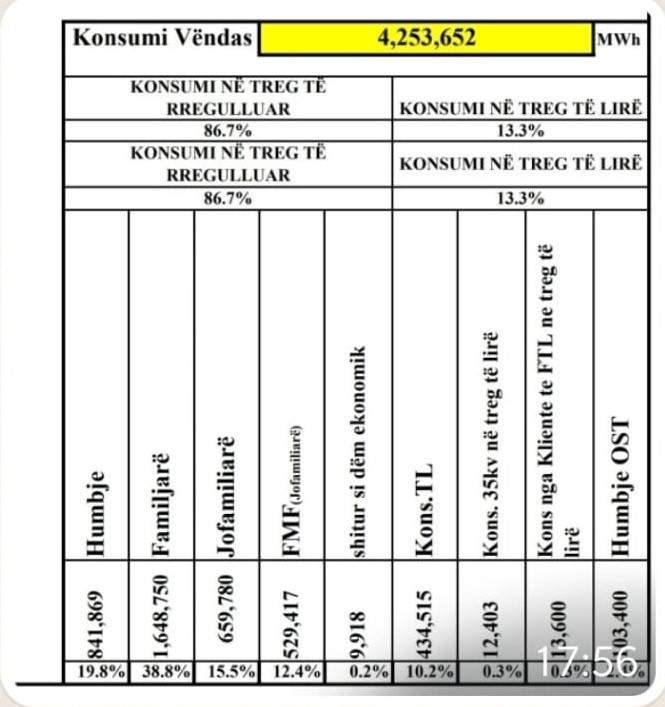 Family consumption and its structure according to families in Albania, 2022

A total of 1.1 million household customers

Annual consumption according to ERE data for 1.1 million contracts with family subscribers for 2021 is 2.95 billion KwH, or 2,950 kwh per contract (average 230 kwh/month). Based on these data, cross-referenced with indirect data from operators’ reports to ERE, reports processed by ERE itself, as well as data published on the structure of consumption by INSTAT, it results that:

But a source at the Energy Regulatory Authority, whose identity is not disclosed, explains to Faktoje that the number of those affected is expected to be much higher in the peak months; December, January, February and August. The same source adds that during these months the consumption of energy by family members increases significantly and the increase in the price from 9.5 Lek to 42 Lek (without VAT) will affect up to 18% of family subscribers.

Profile of electricity consumption, report of the Energy Regulatory Authority 2021

Economy expert Klodian Muço says that the number of families that will be affected by the increase in energy prices is higher than stated.

“The authorities say that there are only 4% of families, but the problem is what happens in the winter period. The government has taken an average of years and months, but it is the average winter consumption that makes the difference. Therefore, in this sense, the percentage of affected families is more than 4%.” – emphasizes Muço for Faktoje.

Even the former Minister of Economy, Zef Preçi, brings the same argument that refutes the government’s claim on the number of families that will pay more for energy from October.

“The average does not show anything, actually the average hides the reality if you do not understand how the consumption is distributed by different bands in the peak months. The 4% figure is abusive, there is no way it could be that little. Only the publication of household consumption data every month by bands, including zero billings, leads to reality. And I think that the number is higher than what is stated, at least ¼ of Albanian families are affected,” Preçi argues for Faktoje.

In order for the ‘salty’ energy bills to go to a smaller number of families, energy expert Lorenc Gordani says that the price of the bill should start from the consumption of 900 kwh per month.

“Whether the price of around 50 lek for each kWh over 800 is fair or not will be decided by ERE, looking at the costs that the companies will present. If you ask me about GDP, it needs to be at least 900 kWh. What I do not agree with is that it should not be the state budget to pay for those who spend more energy than what is necessary. That way, whoever spends more energy, will continue to spend more. It is debatable, for example, to increase the price for everyone, because if it increases for everyone, it means there will be less import, which is what would otherwise affect those spending more than 800 kWh. However, there is no other solution in this situation: either increase the dedicated budget, increase tariffs, or not enough energy,” emphasizes Gordani.

“The government takes action to secure the energy supply needed, supports its own companies with money, but does not set tariffs. The latter are set by the Energy Regulatory Authority. Public companies must apply to ERE, and these applications are made public. Then the Regulatory Authority examines all the costs that the companies have, their plans, and a fixed fee is approved by this independent body. This is how it should be by law. – says Elezi for Faktoje, adding that the data on household consumption should have been made public by ERE.

But the chairman of the Energy Regulatory Authority, Petrit Ahmeti, explains to Faktoje that the government’s decision comes in the middle of an extraordinary situation and, according to him, is within the legal framework.

“The board will meet and make a decision only for the band above 800 kwh of energy. Then, when it comes to consumption over 800 kwh, we will certainly consider what the government has recommended. We must understand that we are in the conditions of an extraordinary situation where the decisions of the government and its proposals are predominant. This is again what what the law says. When an emergency situation is declared, the government assumes the obligation and attribute to decide certain things. We have been part of the discussions,” Ahmeti emphasizes, while he has not yet officially received the requests for the new tariffs from the companies.

Referring to the previous procedures, the Universal Service Provider, which is one of OSHEE’s companies, will submit an application to ERE, listing the reasons for the increase in energy prices along with economic indicators. After that, the Board of the Regulatory Authority meets to consider OSHEE’s request to come up with a decision on the price, which apparently this time is still decided without going through these steps.

Based on the verification carried out, the collected information and expert analysis, we decided to categorize the statement of Minister Balluku that 4% of the population will be affected by the installation of the energy blackout as false.

No more school shifts, a 'serial' promise not kept during mandates 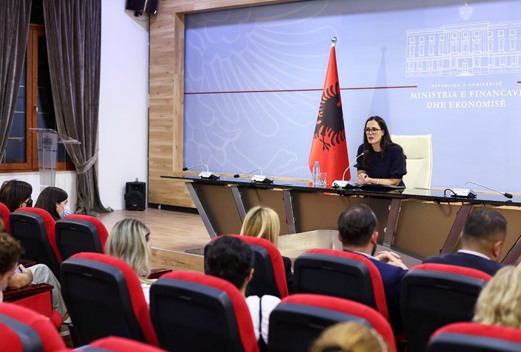