Fierza basin drought – is it weather, or an act of God? 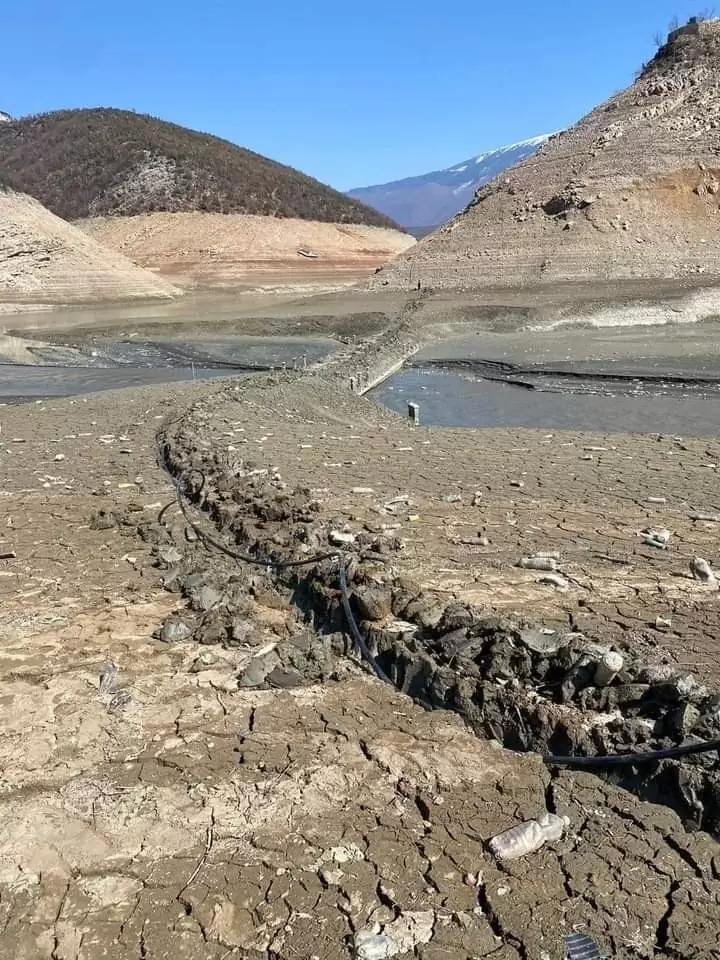 For the first time in a decade, the water level in Fierza Lake marked a drastic drop in March reaching a height of 257-259 meters. Fierza ended up just a few meters away from what is known as the death point which is a level that turns off the hydropower plant turbines and cannot produce any kilowatt hours of energy. But how did we end up at this point? Energy experts say that such situation is due to mismanagement of Drini River Cascade, while the responsible institutions claim otherwise. Faktoje.al provides data showing the actual Fierza depletion in this period is not an act of “God”, but an act of its “owner” which in this case means the Albanian Power Corporation.

“Today level is truly 259 meters in Fierza, however we have 12 purchased meters and the level today would be 271 meters. Hence, there is no room to panic as everything is perfectly managed by KESH staff.”- said the Administrator of the Albanian Power Corporation during an interview for Zero Zone on 23 March. KESH Administrator Ergys Verdho, in Zero Zone on Top Channel talking about the country’s power situation and the measures taken by the Government and KESH to ensure power supply and maintain the price for the household consumer and small business.

Such statement followed the announcement made by the Minister of Infrastructure and Energy Mrs. Belinda Balluku on 20 March admitting the difficult times that Drin River is going through.
“That’s why, starting from today, imports shall be greater than domestic production. There are actually only two aggregates working in Drini cascade right know.” – said Balluku in a press release. While acknowledging the cascade’s difficult situation, Minister Balluku stated, a few days later, that such difficulty came as a result of the drought and not due to its mismanagement.
“KESH Management has been persistent and effective throughout the situation we are facing due to drought, however, on the other hand, we have also been careful about import purchases.” – said Balluku on 23 March during the Energy Committee meeting. Picture taken from the meeting of the Energy Committee

Before Balluku admitted the difficult situation enduring by Drini Cascade, KESH, being the institution responsible for updating the data, had launched an informational obscurity. The latest data reported by KESH for March are those of 15 March, where Fierza was 261.18 meters. Based on such statements, Faktoje verified why Drini cascade water reserve reached the lowest point when it is considered unusual for the view shown in the picture below. Although Fierza level in March reached a critical point, the Albanian Power Corporation counted the pre-purchases as a water reserve. For the first time in the history of the country, KESH added Fierza 12 meters of water that did not exist.

Former KESH Director, Mr. Andis Harasani, said Faktoje that this logic is wrong.  “You cannot measure the level of your water supply by adding the energy you bought. There is no Math when adding water and purchases. It’s the same as picking apples and pears. We are entering on dry months and entering April – May with such level, is really dangerous. “ – stated Harasani.

Whereas, Klodian Gradeci, former Administrator of the Transmission System Operator, expert in the energy, field, says for Faktoje that cascade’s problems have started since last year.

“During 2021, the optimization mechanism of Drini cascade was not properly used, especially in the second 6 months. There were also several investigations of such fact by the Competition Authority. The wrong optimization made by KESH during 2021, forced the energy to be sold in the market not only by the producer, but also by the FTL, i.e., the Free Market Supplier. The role assigned to KESH following the announcement of the power emergency with the amendments in DCM 620, did not find the intended solution, but led to a DCM misinterpretation presenting the consequences which still continue today.”- said Gradeci.

According to him, the lack of the timely long-term purchases forced KESH to produce by not maintaining the water reserve as dictated by the cascade management regulation.

“The very low water reserve shall not support the KESH request for optimization or power exchange even when the inflows are of high levels, as is being proven these April days. According to KESH reports, although the rainfall is very high and inflows in are 800m³/s, Fireza level is 263 meters. “Steps must be taken right now aiming to guarantee a summer with as little problems as possible and with a well-managed cost.” – adds Gradeci for Faktoje.

Even Lorenc Grodani, an expert on energy issues, said that Fierza basin drought in March is an unusual situation.

“We encounter such situation at the end of August. When things are focused on only one hand – as if me and you were – we will be betting; we start betting as state budget is still there. Therefore, such situation can be summed up in one word – the reform made after all those years has as taken steps back and everything has gone as in the 90’; the state has taken everything. The market needs to be liberalized. “Reform is the essence,” Grodani said.

He adds that such moment dictates the need of restructuring companies. “Because these sovereign guarantees are loans taken from public companies; loans are there and shall become part of the invoicing after 6 months when we give up and we will say that everyone shall pay what is due for. One day this will happen and such day is very close,” said Grodani for Faktoje.

However, this is not the first time that Drini cascade reached a critical point. In the last 30 years, Albania has had three similar power situations that are considered as serious. Faktoje has analysed through processed figures all these three situations.

Also, referring to the data of the Albanian Power Corporation, the multi-year average indicators of inflows and quotas of Fierza for March are respectively; inflows 262 m3/s and water level 277.8 m.

The average level of inputs and production at HPP-Fierza

Level of inputs and productions at HPP-Fierza in March 2022

However, in the second half of March 2022, the inflows ranged from 90-100 m3/s, while the water level was 257-259 m. Moreover, Fierza lowest quota reached on March this year followed a year where Albania has produced more energy than needed for consumption – a rare year for the power sector. The comparison of the cyclical data made by Faktoje showed that the low quota of this year can never be attributed to the hydrological situation, as it happened in 1993, 2002 and 2012 when the water reserve was at the maximum quota after on 1 June 2021 and Fierza reached above 297 meters, i.e., beyond the maximum allowed. *(How good or bad the year is can be determined by the Fierza quota at the end of May or at the beginning of June, so these two months are taken as a reference.)
However, if the “owner” let Fierza down, the God did not. April started with rain and the water level in Fierza increased to 262 meters. The normalization of the situation by the God, restored the optimism in KESH by republishing the cascade data. Drini cascade current situation is as below:

Daily output in all three HPPs is:

The Power Reserve is:

Should any data change, the Power Corporation shall keep the public and the responsible authorities transparently informed.

KESH is currently importing a large part of the quantity needed for consumption. With the current reserve and the purchases made, the country has provided the power supply for a month and the power purchases shall continue, even though the government says the power supply is not in question. Under such circumstances, the ALL 25 billion fund will end quickly as consumption during the summer months increases and import prices reach their peak. The government will be forced to pay more money for energy and unfortunately this whole situation has exposed the country to a dangerous unknown that is import invoices.

Shadows of the Russian Agency alert Counter-Terrorism agents in Albania