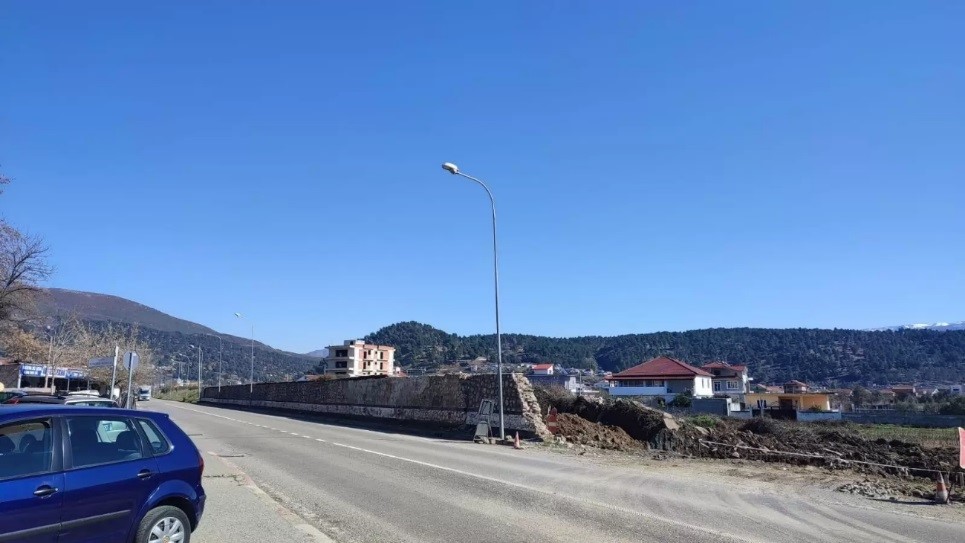 The overpass supposed to have been built in June 2021 at the national road Elbasan-Librazhd crossing, considered as the place of frequent accidents, has not been built yet. The project over 316 Million ALL was interrupted due to some changes, as confirmed by Elbasan Municipality. Such procrastination is directly affecting the inhabitants who, due to the lack of the overpass, risk their livers daily when crossing the road.

On 19 December 2020, Elbasan Municipality confirmed starting the construction of a very important city segment as it’s the cemetery overpass. This would provide solutions to the congested traffic at Cërrik crossing, especially for the safety of the people. A lot of human lives have been sacrificed along the Southern Ring from crossing over the street.

‘The new cemetery road will provide a solution to a 30-year-old gangrene of vehicle mobility along the Southern Ring of Elbasan Municipality’, wrote the Mayor, Mr. Gledian Llatja, in a post on his Facebook profile appearing next to the Prime Minister Edi Rama inspecting the start of works in this segment

THE NEW CEMETERY ROAD will provide a solution to a 30-year-old gangrene of vehicle mobility along the Southern Ring of Elbasan Municipality.

Together with the Prime Minister Edi Rama, Head of SP Parliamentary Group, Mr. Taulant Balla and MPs attending the opening of the construction site at ‘Borodin Mitarja’ street, in Administrative Unit nr. 1 actualizing, thanks to their support, such an important infrastructural project for Elbasan’s citizens. Screenshot of the post of Elbasan Mayor, Mr. Llatja on December 19th, 2020

A day before this inspection on 18 December 2020, Mayor Llatja posted on his profile a video showing the problematic situation of this axis and images of the project worth over 316 Million New ALL showing how would it be like when completed. Screenshot of the video showing the road current situation, posted by Elbasan Mayor on December 18th, 2020.

The construction works’ deadline was 6 months from tender winners awarded comprising a merger of two companies ‘Vëllezërit Hysa’ and ‘Ergi sh.pk’ funded by the Albanian Development Fund. Based on such deadline, the segment on Borodin Mitarja Street should have now been completed in June 2021. The On-site Construction Notice Board shows only the 6-month deadline of works and not the start and completion date as defined by law.

In the meeting of 22 October 2020, the Municipal Council of Elbasan approved the starting of a property expropriation procedure aiming to implement the ‘New Cemetery Road’ project and the railway underpass construction at the national Elbasan-Librazhd road crossing’. Picture of the board placed on the construction site for ‘Labinot Fushë-Qafë Rrenas road and the new cemetery road’ project, Elbasan

The contract was concluded on October 16th, 2020 and the deadline for completion of contractual works for both investments was 8 months. While the Labinot-Qafë Rrenas road has been completed, the second part of the project had provided for the construction of the New Cemetery Road, the railway overpass crossing the Southern Ring, and the railway segment having a length of about 800 meters.

However, the on-site verification conducted on 23 February 2022 show that the promised axis has not yet been built. Picture of the road supposed to have been built in the framework of the New Cemetery Road project, Elbasan

During the observation we found out that inhabitants of the area continue moving on this dangerous part of the road. Also, students cross this segment to go to school. Krasta inhabitants say that such underpass poses a great danger to them; however, crossing the road is necessary as it is the only way connecting them with the rest of the city.

‘I have my house here and this is the only road connecting us to the rest of the city’ said Altin, who is obliged to use such underpass every day to reach the other side of the road.

Whereas Anila considers the road as her only opportunity to go to work despite recognizing the risk posing to her life every day.

‘It would be a great honour for us to open this road as it’s the main road for family members, for us who get sick and who have to go to hospitals.’ Another inhabitant says the biggest risk is posed to school children.

‘The difficulty is acknowledged, however the school children are the main concern, as well as we permeate 4 kilometres to go home while it’s only 200 meters away. I take this road every day because there is no other way. Children are very vulnerable. An overpass for pedestrians is really necessary. When will the overpass be built? ‘We need it now, and not when children grow up’ – she concludes.

The lack of the overpass has led to a large number of accidents mostly resulting in deaths registered on this part of the road.

In September 2021, ARA imposed barriers for Krasta inhabitants aiming to stop using the underpass and the dangerous road segment, as it does not meet the technical conditions.

On September 24, Krasta inhabitants started to protest by tearing down barriers as such axis was the only way to reach the other side of the road.

Mayor Gledian Llatja, during the meeting of the Municipal Council in September 2021, stated that the overpass project is being reviewed because of plans to build a vehicle fleet in the southern part of the city. He said that expansion and adaptation will be considered within the framework of this investment.

In its response to the request for information regarding the reasons for not completing the project, Elbasan Municipality explains:

‘We inform you that as far as the New Cemetery Road and railway overpass construction of Elbasan-Librazhd and Borodin Mitarja crossing are concerned, construction works hereby have been stopped due to technical reasons and are now expecting to restart after the solution provided with the final project.

Based on our on-site verification and on the gathered information, we decided to classify the promise for construction of Southern Ring axis of Elbasan as unfulfilled.