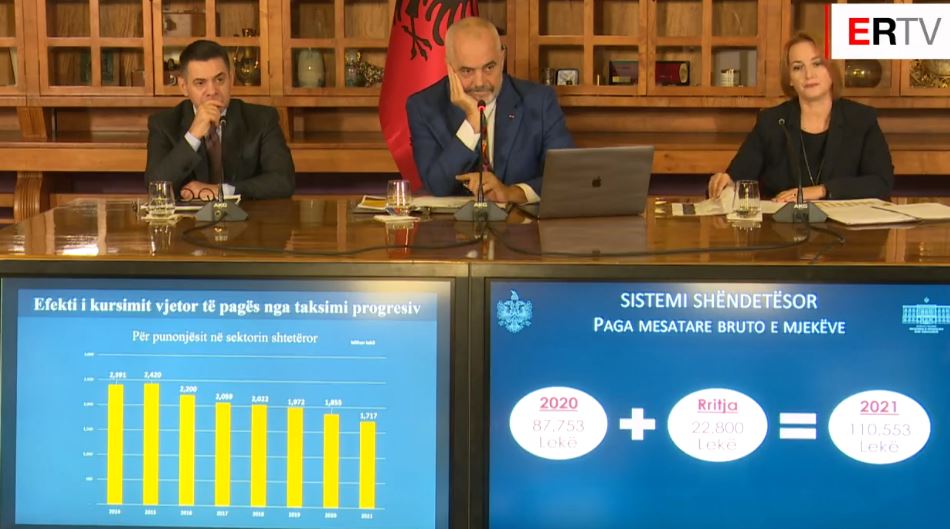 Several days ago, Prime Minister Rama announced that teachers’ salaries would increase by 15%.

According to Prime Minister Rama and the Minister of Finance and Economy Mrs. Denaj, the salaries will increase for both 9-year school and high school teachers.

The former will receive an additional amount of ALL 6300, while the latter’s average salary increase will amount to ALL 6750.

The salary increase is expected to become effective on 1 January 2021.

However, is this 15% salary increase true?

If we were to analyze the figures provided by the Ministry of Finance and Economy and by the Prime Minister’s Office, the increase for each aforementioned teacher category does not exceed 9.6-9.8%.

Let us look at the salary of 9-year school teachers.

According to official figures, the average gross monthly salary of teachers in this category amounts to ALL 65,800. With the additional ALL 6300, the salary amounts to ALL 72,100, however this is not a 15% increase.

Even if we look at the net monthly salary, it does not exceed 9%.

Let us now look at the salary of high school teachers.

According to official figures, the current average gross monthly salary of teachers in this category amounts to ALL 68,800. With the additional ALL 6750, the salary amounts to ALL 75,550, however this is not a 15% increase.

Even if we look at the net monthly salary, the increase is only slightly higher than 9%.

The same reasoning is supported by the Head of the Independent Trade Union of Education of Albania.

In an interview for TvT, Mr. Nevruz Kaptelli stated that the real increase does not amount to 15%.

He also explained that the same goes for the salaries of high school teachers.

Among other things, Mr. Kaptelli stated that this is a lie to teachers.

“For us as the SPASH-ITUEA organization, this is simply the latest deceit by this government. There has been no salary increase throughout this term in office. They are lying to us in broad daylight that the salaries will increase by 15%. Do not think that teachers are stupid”- he added.

Based on the calculations of the figures analyzed, “Faktoje” categorizes the initial statement that the salaries would increase by 15% as FALSE.