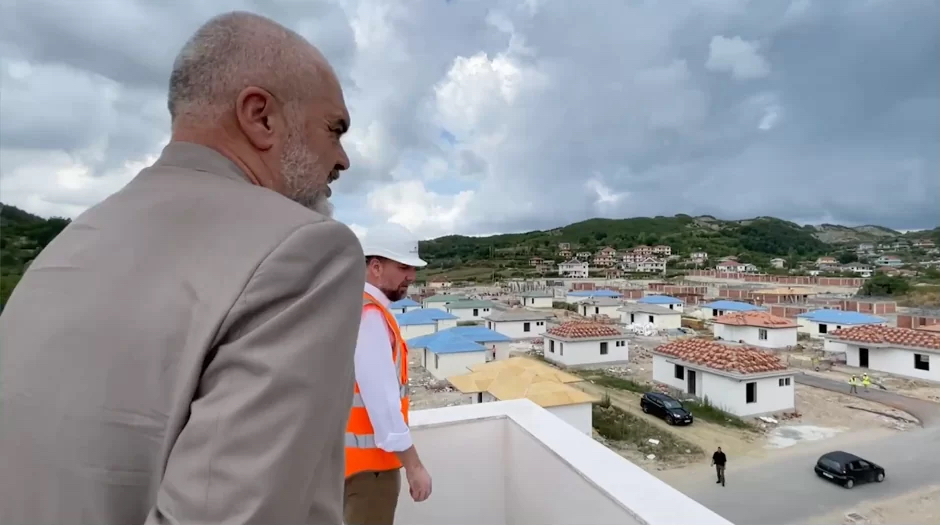 In Bubq, more than 120 households left homeless by the earthquake of November 26, 2019 await the completion of the reconstruction process to enter into their new homes. In May, after the expiration of the deadline regarding the completion of individual dwellings and near the expiration of the deadline for collective dwellings, Minister Ahmetaj promised that the works would complete within the beginning of July. Shortly before the deadline expiration, Prime Minister Rama announced the next postponement to autumn. Based on the field verification by “Faktoje”, it results that the promised deadline is in violation of the foreseen deadlines stated on the table of works in the collective dwelling site.

On May 21, Prime Minister Rama and the Minister of State for Reconstruction Arben Ahmetaj visited Bubq to observe the progress of the reconstruction works. *The number of 75 individual dwellings was later changed

In this area, an administrative unit of Kruja Municipality, 78 individual dwellings and 45 apartments are being constructed, organized into 7 buildings, for a total of 123 households. When talking about the reconstruction deadline of the dwellings, Minister Ahmetaj assured Prime Minister Rama that they would be completed within the beginning of July.

“There are approximately 40-50 working days required for the individual dwellings, whereas all seven buildings will be delivered on June 25” – Mr. Ahmetaj stated. On July 5, Prime Minister Rama returned to Bubq, unaccompanied by Minister Ahmetaj but accompanied by Mr. Dritan Agolli, ADF Executive Director, which is an implementation unit for the reconstruction process involving the new buildings in the area. He visited 47 days following the promise of Minister Ahmetaj regarding individual dwellings and at the end of the deadline established for the new buildings. Not only was the promise not kept in regards to either of the sites, but the Head of Government set a new deadline for the completion of 123 dwellings. Namely, in autumn of 2021. Mr. Agolli was more specific in setting the new deadline, as he told Prime Minister Rama that, along with the infrastructure, which would require a month after the completion of works for the new individual and collective dwellings, the reconstruction in Bubq would conclude in November. “In November, this neighborhood will become a residential one, as you have often stated, like the rich, but for ordinary people” – the ADF Executive Director told Prime Minister Rama. On July 7, “Faktoje” visited Bubq, 47 days after the statement of Minister Ahmetaj, in order to check on the situation. The situation we encountered in Bubq resembled the one posted online by Prime Minister Rama two days prior. None of the dwellings, be they individual or collective, had been completed. What grabbed our attention was that, according to the table, the deadline for the reconstruction of collective dwellings, for which Prime Minister Rama set autumn as the deadline, would expire in June and in accordance with the statement of Minister Ahmetaj on May 21. Whereas, as regards individual dwellings, as we have previously written about 3 months before, there is no table of works on the site. In April, when we reported on the verification of the reconstruction process progress concerning individual dwellings in Bubq, we did not find one. The table was available in the individual dwelling site in Fushë-Kruja, as both projects are included in the area under the administration of Kruja Municipality. Table of works for the individual dwelling site in Fushë-Kruja and Bubq, February 4

According to the table, the works for the individual dwellings in Bubq should have completed since February 2021. Regardless, the deadlines for this area continue to follow one another. Based on the verification we conducted in early July, we found that the table of works was also removed from the Fushë-Kruja site. Fushë-Kruja individual dwelling site which the table was removed from, July 7, 2021