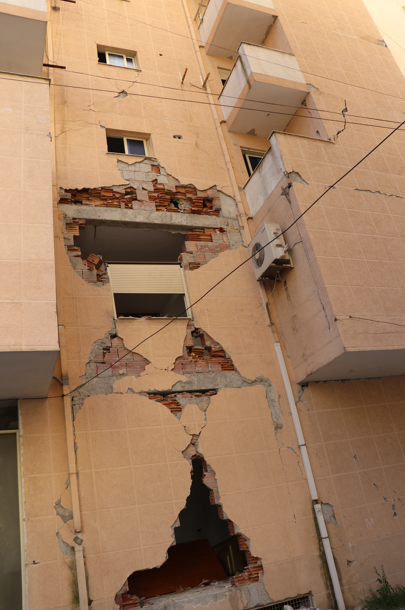 By Faktoje.al - 16 May, 2022
Strengthening fact checking journalism in Albania

There would be no more signs of November 2019 earthquake In April this year according to the promise of Reconstruction Minister Arben Ahmetaj. The on-site verification performed by Faktoje in two of the most affected areas in Durrës and Kombinat in Tirana shows many damaged buildings with no security measures that stands up  as a living proof of what happened on 26 November. The responsible institutions remained unresponsive to Faktoje’s questions about the reconstruction deadlines being violated one after another.

“Our process-based promise is that in the spring of April 2022, there will be no more trace of 2019 earthquake.”- promised the Minister of Reconstruction Ahmetaj almost a year ago at an interview in Report TV.

Such statement was followed by several others, which increasingly delayed the deadlines of the reconstruction process, as the promised deadlines approached.

While sharing with media the government’s decisions within the framework of deadlines for the reconstruction process on 20 April this year, Minister Ahmetaj  stated:

“Apart from several public institutions and apart form Kombinat area as well, most of the reconstruction, mainly of individual dwellings and school buildings, will be completed in the autumn this year. After the autumn, we will continue with Kombinat under construction; however, due to pandemic and expropriations we have had a very intense current advantage, but it still has not kept pace with other sites.”

But what happened to the promise of no longer having any trace of November 2019 earthquake. According to such commitment and despite the delay in rebuilding the new dwellings, the expectation was at least that this spring there would be no buildings damaged by the earthquake, which depending on the damage, either had to be demolished or rebuilt.

Faktoje sent a request for information to the Ministry of Reconstruction, where among others we asked for data on reconstruction progress in municipalities affected by 2019 earthquake. Screenshot, request for information to the Ministry of Reconstruction dated 29.04.2022

We haven’t received a response until publication of article herein.

Faktoje sent a request for information to the implementing units of the reconstruction process, namely the Albanian Development Fund and the Municipality of Tirana, however we have not yet received a response.

On 28 April, Faktoje carried out a verification in Durrës aiming at checking if there were still traces of 2019 earthquake.

Along the road to the Durrës beach area, you can still see massively damaged buildings, but they are neither fenced to collapse, nor have any signs of possible reconstruction. Artan, one of the area’s residents says that reconstruction process seems to have been suspended and for about two years they have no information what will happen to some of the damaged buildings.

“Following the earthquake, experts came and saw the level of damage, however it has now been two years since residents have left the apartments and building has not started. They have neither started to demolish, nor to rebuild; they are still damaged since the earthquake. “We have doubts if they be finished soon,” said Artan. Although they seem to have been abandoned by residents due to damages, some buildings still have posted notices indicating ‘Apartments for sale’. Following the verification performed in the Durrës beach area, we went to Kombinat area of the capital, whose reconstruction deadline was postponed beyond the autumn this year by the Minister of Reconstruction Mr. Arben Ahmetaj

Residents of the area told Faktoje that 2 and a half years after the earthquake, some of the damaged buildings at the DS5 level have not yet collapsed.

“This was the first building to be demolished after the earthquake as it was massively damaged. All inhabitants of this building left their flats immediately and still live in rented houses. Meanwhile, as you can see, such building has not been collapsed yet. “The building has become a source of infection and a solution must be given as soon as possible,” said to Faktoje Mr. Mehmenti, a Kombinati’s resident. Erdi, another resident of Kombinat, who owns a flat  in one of the buildings designated to be collapsed shows that part of the residents has already left, while the other part has refused to leave their flats.

“Some residents have come out following the announcement of the demolition of the 168/2 building. I personally didn’t move and I don’t agree with its demolition because its damage is not at the DS5 level. Furthermore, we have no further announcement and no documents of what will happen in the future and where will the flats be given if such building collapses. The first expertise act for this building was DS3, then the second expertise act was issued at DS5 ”- tells Erdi to Faktoje. Picture of the site where buildings collapsed in Kombinat

Lack of transparency on the progress of the reconstruction process

Transparency and accountability were the points of the reconstruction program from the aftermath of the earthquake of 26 November 2019. The unique government portal rindertimi.gov.al was created precisely to unify the information and to convey it transparently to the public.

Faktoje noted the portal’s lacking of publications of periodic progress reports on the implementation of reconstruction programs. Screenshot, the unique government portal on 22.07.2020 latest information on the progress of the reconstruction process

Faktoje reported on 18 November 2021 on the lack of transparency of the unique government portal, although in a press release in February 2020, Minister Ahmetaj pledged to guarantee transparency over the reconstruction process.