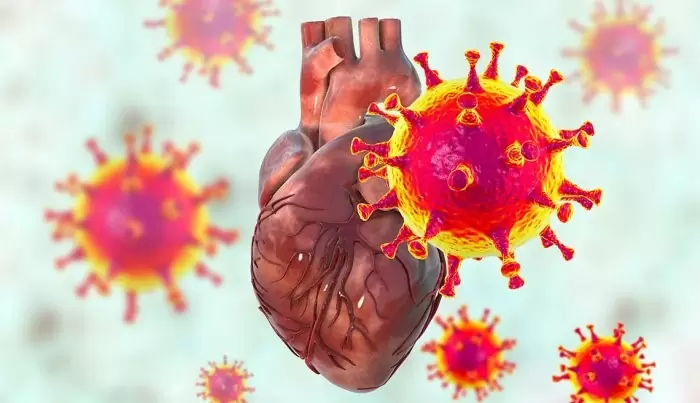 Since 2020 when Covid-19 pandemic break out, the number of fatalities has increased and they are mainly caused by heart attacks and strokes. Cardiologists alarms that Covid-19 gave a strong shock with consequent frightening increase of heart attacks, even in healthy and young people. Experts say that pandemic-focused decision-making has led to a reduction of hospitalizations of patients, an increase of fatalities due to circulatory diseases, and an increase of advanced cancer patients.

Faktoje discussed with Mr. Alimehmeti, who provided a  study conducted by a group of Albanian doctors regarding the impact of pandemic on patients with other diseases. The well-known physician is the co-author of this study published in February 2022 highlighting significant data on hospitalizations and deaths during 2019-2020.

Among others, the study states:

Fatalities related to heart disease-related group diseases have also become the largest over the recent years. Faktoje talked to a cardiologist at the University Hospital Centre of Tirana, Mrs. Daniela Teferici who confirms the increase of people with heart attacks and have consequently had loss of life.

“The one that bought the most complications was Delta variant of  Covid-19. September to December 2021 noted the period of time with the greatest influx. As the number of Covid cases increased, so did the number of patients with heart issues. The cases are different from one-another, from the asymptomatic forms to patients with no symptoms. Such cases are only seen through magnetic resonance imaging. Unfortunately, we have also seen young ages with low myocardial function in persons who have had severe heart muscle involvement. Actually, I am talking about affecting the ages of 20s, but also children. The virus has also spread to myocarditis in children.

There has been an increase in cases because we are in daily contact with such patients. There was a very large number of heart attacks due to Covid. There may have been diseased not diagnosed arteries and Covid  inflammation has overlapped leading to numerous issues.

Teferici further states that citizens went to cardiologists when they felt the disease’s consequences, not for routine visits.

“Covid affected not only sick patients, but even those having a healthy heart. Covid mainly affected heart muscles, caused coronary artery thrombus, thus causing heart attacks in people who could have coronary artery disease or even in those who were not diagnosed, i.e., seemingly healthy from the outside. It also caused rapid heartbeat or arterial hypertension; there were also many cases in which caused thrombus infarctions to the brain.

Complications start one or two months after the infection has passed and can last up to a year from the onset of complications. That is why there were people who, even 6 months after Covid felt frequent and helpless heartbeats, an arterial hypertension gone out of control of the treatment and treatment review was needed “- says the cardiologist.

We sent a request for information to the Ministry of Health and University Hospital Centre of Tirana regarding the numbers of people who went to the hospital with a heart attack. We are still waiting for a response of this institution. Request for information sent to MoH and UHS, 4 May 2022

How have fatalities figures of diseases changed over 2018-2020 period?

“In 2018, deaths from the ‘Circulatory apparatus’ disease group are 53.2% of total deaths. This group of diseases continues to be the leading cause of deaths having a mortality rate of 404.7 per 100 thousand inhabitants and compared to the previous year has had a decrease of 2.7%.

Deaths from the ‘Tumour’ disease group account for 16.9% of total fatalities, ranking as the second largest group as referred to the number of caused deaths.

“Deaths from the “Unspecified symptoms, signs and diseases’ disease group marks an increase of 3.4%, compared to 2017” – wrote the report of the Institute of Statistics.

If referring to INSTAT data in 2019 and 2020, it is noticed that there is a significant increase in fatalities. According to the given data, there was an increase of people affected by diseases of the “circulatory system” in 2020 by 23% compared to 2019.

“In 2020, deaths from the ‘Circulatory apparatus’ disease group are 52.2% of total deaths. This group of diseases continues to be the leading cause of deaths having a mortality rate of 508.0 per 100 thousand inhabitants. Compared to the previous year, this disease group has increased by 23.2%.

“Unspecified symptoms, signs and diseases” disease group is the second group with the highest number of deaths (17.0%). Compared to last year, 24.6% more life losses were recorded.

Deaths from the ‘Tumour’ disease group account for 13.0 % of total fatalities, ranking as the third largest group as referred to the number of caused deaths. Compared to 2019, 0.2% more loss of life from this group of diseases have been recorded.

The number of deaths caused by “respiratory diseases” disease group is almost 4.5 times higher compared to 2019, due to COVID-19. Approx. 8.9% of total deaths are due to this group of diseases and the mortality rate per 100 thousand inhabitants is 86.5 deaths”, – stated the INSTAT report.

Other problems caused by the pandemic

The doctor, Mr. Ilir Alimehmati stated for Faktoje that during pandemic, hospitalizations fell, however unfortunately mortality was increased.

“During quarantine, it was noticed that the number of hospitalized patients with other diseases decreased, while the number of deaths increased. We take precautions on one side and they cause indirect problems on the other side. At first the cure was not optimal, as the fear of virus and quarantine forced people to stay home.

Second, funds for coping with Covid-19 were obtained from other diseases. Investments in other diseases were lower. “Thirdly, there were stress and fatigue effects thus being many elements that harmed patients.” – argues the well-known physician.

What other consequences did the pandemic have?

“There are many problems arisen as a result of our behaviour towards the pandemic. We can mention the early screening of cancer. Today we have cases of cancer at a more advanced stage. Another issue being noticed, even at a  global level  is the fact that the vaccination system for children is lower. For instance, we can mention here the measles epidemic as due to Covid-19 attention, children were not vaccinated according to the set calendar “- explains Alimehmeti.

In 2020, media raised concerns on pandemic effects on the access of chronically ill citizens aiming to receive medical care. Quarantine, fear of infection from Covid, but also bureaucratic procedures in hospitals influenced citizens not to turn to hospitals for medical treatment, aggravating their health condition.

Whereas, in an article published in 19 April this year, Faktoje reported that Albania spent less than some countries in the region on health care. Low public spending on health care means citizens have spent out of their pocket to get medical care, especially during Covid-19 pandemic situation.