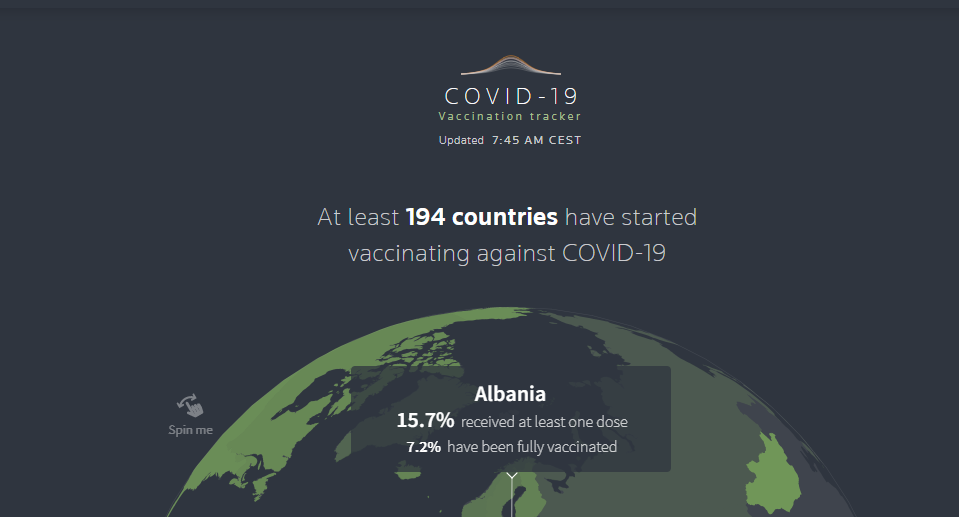 Albania ranks second in the Balkans according to the numbers of the population vaccinated against COVID-19, but the transparency of the process remains poor. The official website of the Ministry of Health only announces the total number of vaccinations since the start of the process, but lacks detailed daily reporting for both those receiving the first dose and those receiving the second. There are no details of vaccinations by city, by type of vaccines used by category or age group.

Since the start of the vaccination process most Western Balkan countries have struggled to obtain the COVID-19 vaccine, but this has not stopped some of them from catching up with other countries.

Serbia tops the list of Western Balkan countries in population vaccination. Albania ranks second followed by Montenegro. Although this process is considered satisfactory compared to neighboring countries, the same cannot be said about the level of transparency.

According to the updates on the website of the Ministry of Health there have been more than 680 thousand vaccinations since May 18.

Daily archive data on the MoH website regarding the number of daily vaccinations as there were months ago, are lacking. These data are lacking, whereas the official websites of the relevant institutions in neighboring countries, such as Italy display these data in a detailed graphic way and update them regularly. *Data of MoH on the number of vaccinations *Data of the “Albania smiles” section on the MoH website *Injection of doses in relation to those administered by region, Italian Ministry of Health Vaccination reports in Albania are provided as announcements updating on the total number of vaccinated people, since the beginning of the vaccination process.

Currently on the official website of the Ministry of Health there is data of vaccinated persons since the beginning of the vaccination process and the number of those who have received the second dose, but there are no daily data.

Although the vaccination protocol made public at the beginning of the campaign emphasizes that ‘real time monitoring of the vaccination process, safety and effectively of the COVID-19 vaccines will benefit a lot from the use of electronic information platforms’, the data provided to the public are superficial. *Data from the vaccination protocol

In contrast to Albania, region countries provide daily reports on the administration of the first and second dose.

Serbia is one of the countries where most of the population has received both doses, not only in the region, but in the whole world. According to Our World Data Serbia ranks 11th in the world for vaccinating its population against COVID-19.

*Data from Our World in Data

WHO has also considered the Serbian vaccination campaign as one of the most intensive in a report from March 2021.

“In Serbia, more than 1 million people, or over 13% of the country’s population, have now been vaccinated against the virus responsible for COVID-19.  This early success provides a strong foundation for the broader population-wide campaign yet to come.” – states WHO.

Also, in terms of providing the second dose of the vaccine Serbia ranks first among Balkan countries. According to Reuters data, until 17/05/2021 almost 32.8% of the population had received the first dose of the vaccine, whereas 25.1% were fully vaccinated. From an investigation that ‘Faktoje’ carried out on the official website of the Serbian Ministry of Health it turns out that they deliver a separate report on new vaccinated cases and those who receive the second dose.

*Data from the official site of the Serbian Ministry of Health

It is easier to retrieve information through these data on the people who are fully vaccinated against COVID-19. Even in Montenegro the reports from the Ministry of Health are detailed daily for each person who receives the first dose of the vaccine and those who receive the second dose. *Data from the official site of the Ministry of Health of Montenegro.

In North Macedonia 7.2% of the population has received the first vaccine dose whereas 1.2% is fully vaccinated. Only a few days ago Serbia provided the second dose for the vaccination   of 2.200 citizens of the Republic of North Macedonia who received the first dose of the AstraZeneca vaccine in March of this year.