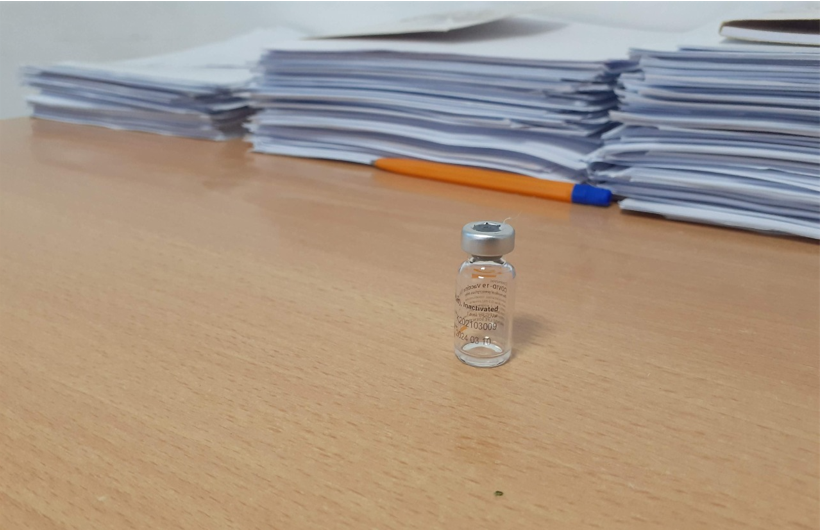 Full vaccination of 70% of the population by the end of June is the next target set by the Ministry of Health, after failing to vaccinate the entire population by February 2022. Experts consider the chances low, as the citizen’s interest against vaccination has decreased. Moreover, millions of doses of expired Covid-19 vaccines are even reported to have been thrown away in several states. A few months ago, the Minister of Health promised the arrival of hundreds of thousands of vaccine doses, however there is no official announcement of any new contingent. The institution is “silently” skipping the requests for information addressed by Faktoje concerning this matter.

The Ministry of Health has shared with the vaccination centres a WHO directive stipulating the vaccination of the 70% of the population with both Anti-Covid vaccine doses by the end of June this year.

“According to WHO directive, 70% of the Albanian population should be vaccinated with two doses by the end of June 2022 aiming at ensuring such a vaccine coverage in order to achieve the herd immunity” – stated  Dr. Bruna Shiroka, referring to the directive.

Faktoje initially addressed a request for information to the Ministry of Health regarding vaccines and the fact whether other doses have arrived in our country, Request for information sent to Ministry of Health, 29 March 2022

We have not yet received a response from this institution, even after complaining to the Commissioner for the Right to Information.

Is it possible to achieve such goal by the end of June when citizen’s interest against vaccination has decreased?

“Based on current reports, less than 45% of the population over 12 years old have been vaccinated in Albania. Given that and in order to reach the 70% target, more than 25% of the population needs to be vaccinated; I think this is impossible. I base my opinion on the way the vaccination campaign has gone so far, as well as on the Anti-VAX and No-VAX attitudes expressed by broad segments of the population.”- explains Dasho.

On the other hand, Faktoje observes that the medical staff of health centres is trying to encourage the citizens to be vaccinated.

“I was at the health centre to get my medications and the doctor insisted on my third dose vaccination arguing that I have to travel abroad, or because it is mandatory,” said a 67-year-old man.

Meanwhile, according to the data of Our World in Data only 43% of the population or 1.22 million inhabitants have been fully vaccinated in Albania until 14 April. Screenshot of Our World in Data, as of 14 April

The progress of the vaccination is reported on the official website of the Ministry of Health every 2 or 3 days.

In March, according to the Ministry of Health  54.141 vaccinations were done. In an article published in March, referring to the Ministry of Health official data, Faktoje reported that by that time 52% of the population had been vaccinated.

Promises of the Minister Manastirliu on Anti-Covid vaccines

In October, the Minister Mrs. Ogerta Manastriliu stated that 170,000 doses of the Pfizer vaccine were expected to arrive within this month.

While, at the end of December 2021, the Minister of Health stated in the Assembly that the government has signed a new contract with Pfizer for 1.5 million doses of vaccine.

“For many it consists no longer a news, but let me tell you, that a few days ago over 100,000 doses of the Pfizer vaccine arrived.”

However, the official website of the Ministry of Health shows no announcement of this contingent arrival.

On 28 February, Manastirliu reiterated that 1 million doses of Pfizer vaccine and 500 optional doses are foreseen to be purchased in 2022, while the first number of doses of this agreement was expected to arrive in the country within March. Such vaccines are not officially reported to have arrived so far.

Faktoje addressed another request for information to the Ministry of Health asking whether there are a stock of Anti-Covid vaccines in our country, as all over the world. We are still waiting for its response. Also, Faktoje asked the Public Health expert, Mr. Erion Dasho about expired vaccines. He stated that has been a lack of transparency regarding this process and expired doses of Covid-19 vaccines are likely high.

“In Albania there has never been transparency about expired doses. “Seen from the perspective of the unsatisfactory progress of the vaccination process, it is very likely that there have been not reported expired doses,” said Dasho.

A “La Repubblica” article shows that 241 million doses of Anti-Covid vaccines have been thrown away worldwide after being expired. Regardless of the good vaccination system in rich countries, many citizens seem to have refused injections. Meanwhile, in our country no one admits the existence of doses of expired vaccines, even though all the facts lead to this logic.

“We already have a lot of vaccines. There are 2.3 billion doses in refrigerators worldwide waiting to be administered. “In rich countries only, 241 million doses have been thrown away so far because of expiration date,” stated the article of “La Repubblica”.

Lack of transparency about vaccines

Faktoje has previously reported on the lack of transparency from the government regarding the purchase and administration of anti-Covid vaccines.

An article, dated on 10 February, reported that the Albanian government had decided to use the reserve fund to purchase the vaccine against Covid-19, while the value of the contract was kept secret. The State Budget Reserve Fund for 2021 was 4 billion ALL in total. However, only 35 days following the entry into force of the approved budget for 2021, the government decided to amend it with the Normative Act dated 5.02.2021. After the ‘blitz’ intervention, the Reserve Fund was increased by ALL 1 billion.

On 21 May 2021, Faktoje reported the signing of the second ‘secret’ agreement on vaccines from Turkey, but even this time the price was kept secret.

The consultations with the economic experts showed that approximately 28 million Euro were spent for the purchase of Anti-Covid vaccines in the first 9 months of 2021.

“The reserve fund of 9 billion ALL, approved with Law no. 137/2020 ‘On the budget of 2021” as amended, is foreseen to be used for: Unpredicted cases of general government units amounting of 8,000 million ALL; Facing the cost of the elections for the Assembly of 2021, amounting of 1,000 million ALL.

The Reserve Fund for contingencies of general government units was used through 22 DCMs, for a total value of 6,350.7 million ALL out of the planned 8 billion ALL or about 79% of the plan.

Out of these: 3 472.7 million ALL have been used as per the relevant DCMs on settlement of payments for the purchase of vaccine doses.

596.3 million ALL were used for current expenditures covering the costs of other anti-Covid19 measures.

At the end of the 9 months of 2021, the unused balance of the state budget reserve fund is approximately 1 649.3 million ALL.

The Reserve Fund of 1 billion ALL planned to cover the election cost of the Albanian Parliament 2021, has been allocated and used according to the relevant DCM approved for this purpose”- argues the expert.

700 kilowatts electricity consumption band; the 7 years that turned the nest of rascals” into innovative anti-crisis ideas