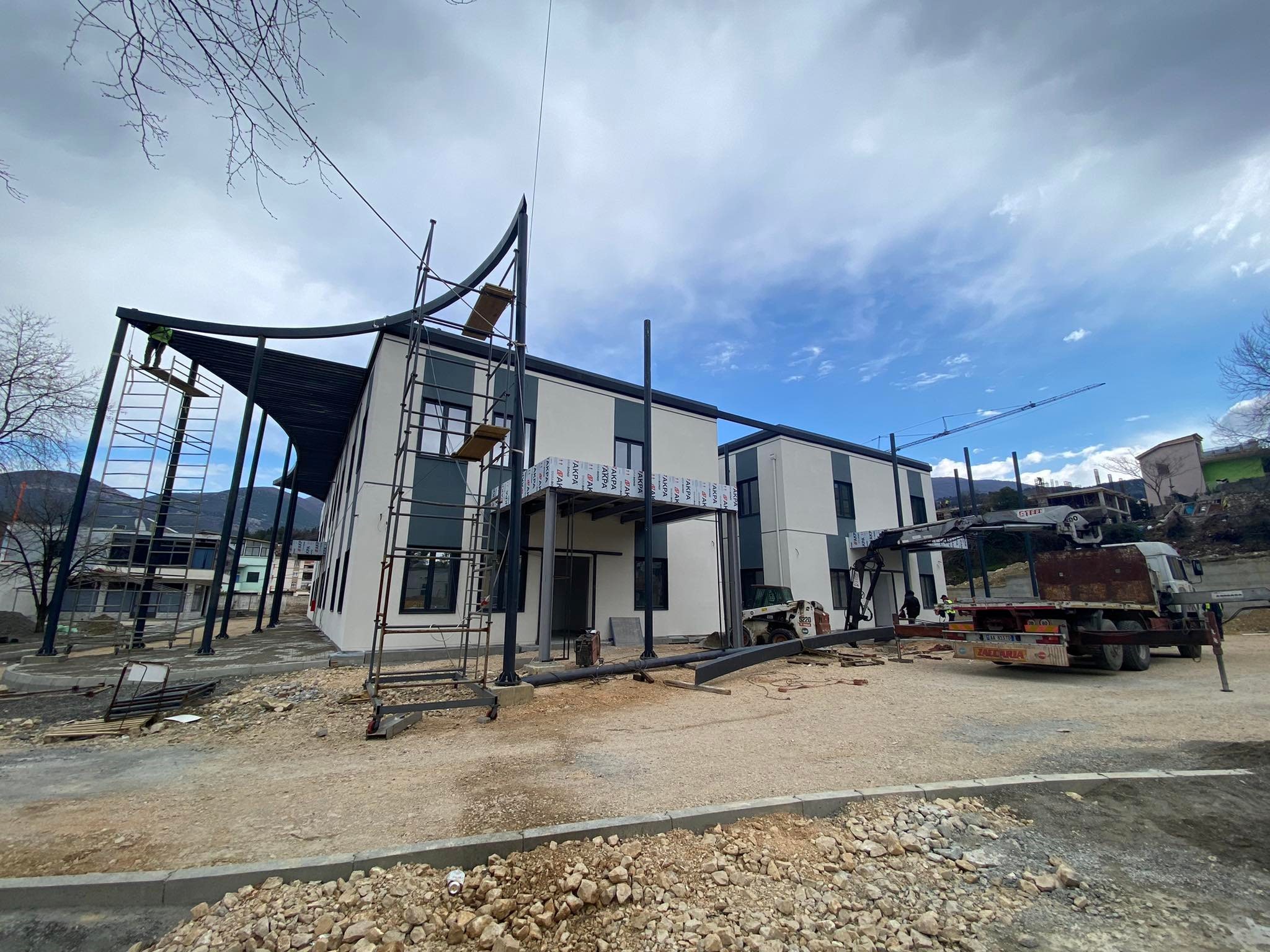 Laç municipal hospital covering eighty thousand inhabitants’ needs has still remained a construction site although the government promised its finalization a few months following the collapse of the earthquake dated on 26 November 2019. March this year was the following deadline set by the Minister of Health and Social Protection Mrs. Ogerta Manastirliu for the completion of the 2.8 million Euro project. Faktoje’s on-site verification showed that the facility reconstruction and electrical installations are being procrastinated with the Ministry not having announced yet the tender on medical equipment purchase.

‘In little over two month we will manage to conclude this project. We currently are at phase of electrical and plumbing installations being done along with the masonry’ – stated on 22 January the Minister of Health and Social Protection Mrs. Ogerta Manastirliu during an inspection at Laç hospital construction site.

Manatirliu’s promise follows several consecutive violated deadlines of such hospital construction after the collapse of the existing one by the earthquake of 26 November 2019.

Faktoje addressed a request for information to the Ministry of Health and Social protection aiming to find out when the construction works of the new hospital are expected to finish and when may it be ready to provide services for the citizens. Request for information sent to the Ministry of Health, 18 February 2022

Ministry of Health clarified the ongoing status of works currently being carried out in accordance with technical conditions, but didn’t provide a deadline as to when this facility will be operational.

‘Laç Hospital Construction works are being carried out pursuant to the approved draft-estimate, respecting all technical conditions and are being continuously monitored by the relevant structures. Laç Hospital new facility is being constructed over the trails of the old hospital building and it’s currently at the phase of the mass construction works of the hospital facility interior and of the technical room facility, as well as yard arrangement and parking lots works keep going on. Upon completion of the construction works of such facility, the hospital shall be equipped with the necessary infrastructure for the provision of the hospital health service’ – stated the response of the Ministry of Health. During the on-site verification and following the confidential consultations sources, Faktoje found out that the Ministry of Health has not yet announced the tender on hospital medical equipment purchase and therefore it’s not known when it will be functional for Laç citizens who have been waiting for years for its completion.

We also checked the Ministry of Finance and Economy  website on the 2022 draft budget, however no defined fund for the Laç Hospital medical equipment purchase appeared in the investment list. ‘It’s expected to be ready by the end of March’. As far as capacity is concerned, it covers 11 hospital bedrooms upstairs with Polyclinic and medical specialities on the other side and with Emergency placed here. There is a micro-surgery room. We are now working on patching and gypsum ceilings. We are dealing with external rehabilitation. Tile flooring has started. ‘We don’t know when it will be ready for the patients’ – stated the on-site workers for Faktoje. Faktoje performed another verification on 10 March, as we are getting close to the deadline set by MH on the completion of the Hospital project. Comparing to February, works had slightly progressed and chances of finishing within March were slim, as the workers confirm. According to them, the exterior project of the facility has recently endured some changes requiring time and money ‘. The workers explain their efforts to finish it as soon as possible, however they say that lack of funds complicates and lowers the work progress.

‘Hospital has not been completed yet; we need money. The structure may have been built, however there are electrical installations and a lot of things not ordered yet; we can’t have them without paying for. They asked for a revision of the estimate having changes because of the external system modification. Exterior facilities should be demolished; the concrete wall was constructed aside. We really don’t have money now; there are no more money, although we are making our efforts to work’ – stated the workers for Faktoje. The board containing the project’s details is missing at the construction site, which is a legal obligation turned out to have been infringed for many facilities in the reconstruction program. Faktoje has continuously reported on the progress of Laç Hospital construction works based on the promises made by public officials.

On  14 December  2019, Prime Minister Rama promised, during a meeting in Kurbin, that Laç Hospital was the first one that would be done and it would open its doors within the first 6 months of 2020.

On 28 February  2020, the head of government, present at the meeting where new models of reconstruction were presented, stopped even at Laç hospital.

‘We are pretty near the beginning. Laç hospital shall be operational at most in June, because there are procedures that must be followed’ – said Prime Minister Rama setting such deadline for the completion of the facility reconstruction.

On  7 March  2020, Prime Minister made another announcement through his profile on social networks.

‘Project for the construction of Laç Hospital, which will be built on the old hospital site after the fatal earthquake, is now ready – wrote Rama in his Facebook post.

On 20 September 2021, Faktoje reported that Laç Hospital had become the classic example of how government deadlines and promises rebuilding facilities of vital importance to citizens are being procrastinated. Faktoje verified the non-fulfilment of the subsequent deadline reported by the Ministry of Health for the completion of this facility in September.

Laç citizens are currently receiving health care services at ‘Fara Mirësie’ (Seeds of Kindness) centre serving as an emergency for a community of eighty thousand inhabitants. Faktoje visited this centre on 17 November 2021 stating the difficult work conditions in which doctors and nurses operate. In addition, the ‘Emergency’ has neither the equipment, nor the space to provide basic medical care to patients. Laç Hospital Project, according to the Ministry of Health is worth 2.8 million  Euro covering an area of more than 2500 square meters. However, no institution provides explanations on the additional cost of procrastination and when such hospital will be operational.

A litre of oil = 270 ALL, experts: The government has the legal basis to intervene!