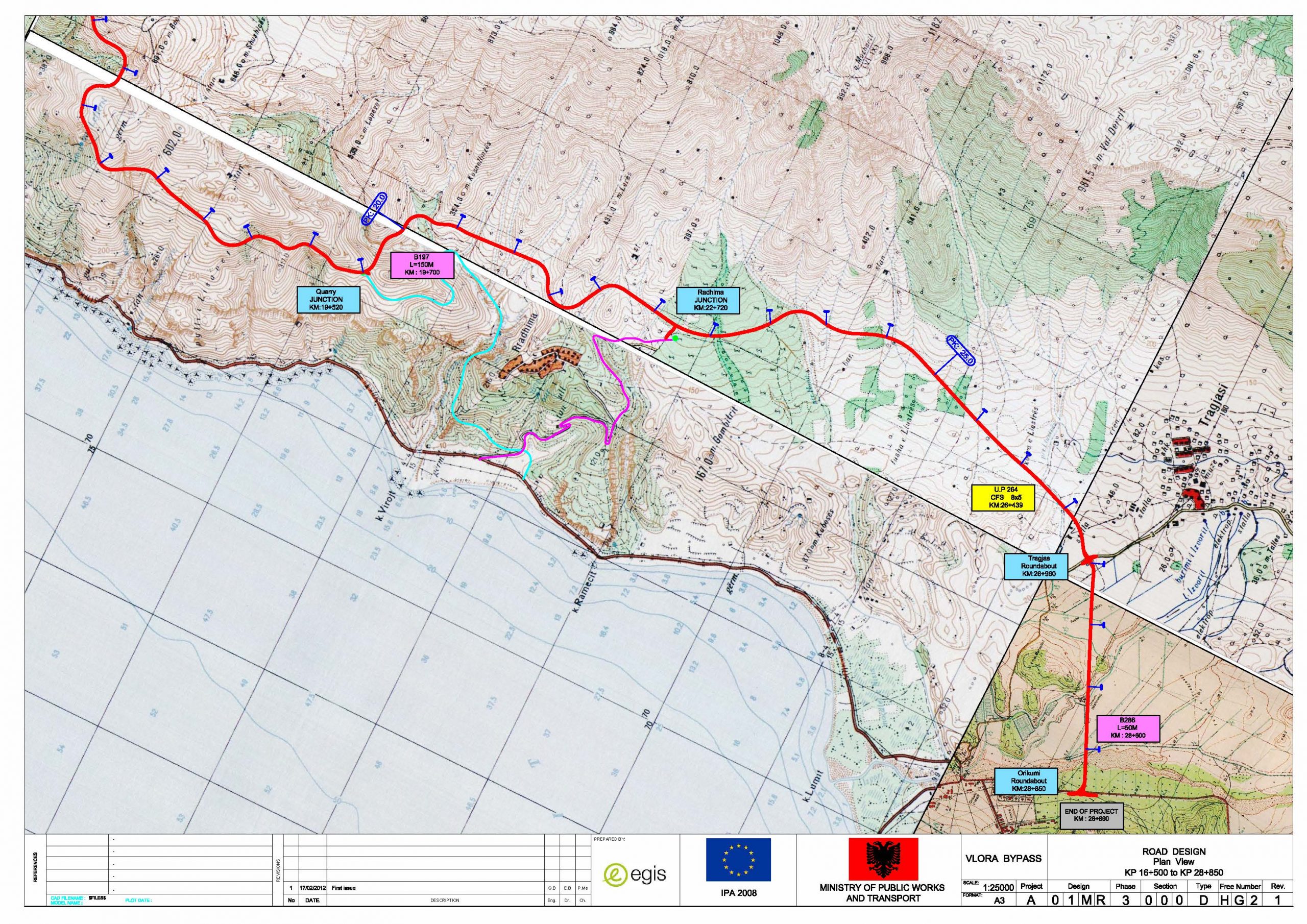 During the 2017 electoral campaign, amongst other major road transportation promises, the Socialist Party included several ambitious projects, namely the Ten-T Core central network, the Adriatic-Ionian corridor, the completion of Fier and Vlora bypasses and Arbër Highway.  At the end of the second governing term, “Faktoje” conducted field verifications in regards to the above projects, part of which had been promised since 2013.

In the 2017 electoral campaign, in its governing program, the SP, seeking to obtain a second term, highlighted:

“The priority projects of the Albanian Government will include: the TEN-T Core central network; the Adriatic-Ionian corridor; the national network: completion of Fier and Vlora bypasses and Arbër Highway.”

What has been the progress of each project by the end of the 2017-2021 governing term?

The Trans-European Transport Network (TEN-T Core), initiated by the EU, aiming to complete and modernize transport roads by 2030. The TEN-T Program was designed in 2006 by the European Commission to support the construction and improvement of the transportation infrastructure throughout the European Union. Albania, along with other Balkan countries, is part of the Indicative Extension of the network, however, the implementation has yet to commence. “Faktoje” researched on the official EU website where updated project data are provided and concluded that, so far, Albania has not been included on the map with any existing roads as part of the project.

Albania is expected to be included in the TEN-T European network through the Adriatic-Ionian motorway (which, in the majority of the Albanian territory aligns with the North-South road axis) that is part of the Mediterranean Corridor.

“Faktoje” submitted a request for information to the Ministry of Transport, requesting the provision of data on the progress of the said project and discovered that only the feasibility study has been conducted so far and the works have yet to commence. On December 6, 2018, the Ministry of Infrastructure and Energy announced the conclusion of the selection procedures for the company that would work on the Fier Bypass and connect the Levan-Vlora national road to the Lushnja-Fier road. The project value stated in the contract was 37,944,221 Euros and the selected company was “CGC, Combined Group Contracting”. There have been several promises and deadlines stated in connection to this project, some dating back to 2014.

In May 2014, Mayor of Fier Baftjar Zeqo, together with the engineer of the Italian company undertaking the Bypass works, promised that the aforementioned road axis would be completed in 18 months, i.e. around December 2015, in accordance with all parameters.

On October 14, 2016,, Minister of Transport Sokol Dervishaj stated: “I am greatly pleased that, in spite of delays and conflicts, the project has exceeded its progress estimations and that the works are being performed in full capacity. We believe that the project will conclude by next spring.” According to Mr. Dervishaj, the Bypass should have been completed in the spring of 2017.

On January 22, 2018,, Deputy Minister of Infrastructure Artan Shkreli said: “The works for Fier and Vlora Bypasses will commence in April, provided everything goes well, although we cannot be entirely sure, we hope that by July the Fier Bypass will have one available lane.”

In June 2018, Edi Rama stated: “In September we will be ready to commence the works uninterruptedly, in order to complete the Fier Bypass before the upcoming tourist season.”

In June 2018,, Minister of Infrastructure and Energy Damian Gjiknuri stated: “I am certain that we will commence the works for these two important Bypasses (Fier and Vlora) within the year and we hope that the Fier Bypass will be completed by next year, whereas the Vlora Bypass will require more time.”

On 16/06/2020, Prime Minister Rama announced the completion of works for this axis. Based on the field verifications by “Faktoje”, it was found that after 5 exceeded deadlines, the Bypass is fully functioning. Similarly to the Fier Bypass, the Vlora Bypass has also been part of continuous promises over the years, as well as part of terminated contracts with the Albanian government.

On March 19, 2015, the contract of works for Vlora Bypass was concluded, where former Minister of Transport Edmond Haxhinasto requested the company to work in accordance with the high road sign and safety standards.

In August 2017, the government announced the termination of the contract with the Italian company “Serenisima” on the grounds of failure to fulfill obligations, and the reopening of tender procedures. In November 2018, the Albanian Road Authority entered into a contract with the Albanian-Italian contracting company “Gener 2 & Impresa Ing.E.Mantovani”, on the commencement of the works for the bypass, with a contract value of 35.8 million Euros.

Two years after the commencement of works, on 26/06/2020 Minister of Infrastructure and Energy Belinda Balluku, together with the Albanian Road Authority Director Ergys Verdho and Vlora Mayor Dritan Leli inspected the works progress for this segment.

Referring to the works progress, the Minister of Infrastructure and Energy stated that there is the possibility for this project to be fully completed and accessible to citizens by February of the following year. Following this statement, “Faktoje” conducted a field visit on April 9 to determine whether the axis had been completed. However, contrary to what Minister Balluku had claimed, the bypass had yet to be completed. Despite the promises over the years, the Vlora Bypass remains uncompleted. There have been numerous promises and deadlines claimed regarding Arbër Highway, 11 of which have been made between June 2015- June 2018 alone. With the termination of the second governing term approaching, it has been promised that Arbër Highway will be completed before the elections of April 25. Regardless, with less than two weeks remaining from the general elections, the Arbër Highway project has yet to be completed.