The flames engulfing Sazan island a few days ago “re-triggered’ the debate on how to manage fire situations by the authorities. Ministry of Defence initially refused to intervene on the island from the air arguing that hearth would be brought under control by members of the armed forces, navy and fire brigade. These unsuccessful attempts forced the Ministry to withdraw and activate the EU Civil Protection Mechanism seeking Greece’s help to intervene by air.

“I appreciate all the concerns and opinions expressed without hesitation; however, we rely on field experts assessing that the most effective technique in the case of Sazan island fire is insulating of hearths by creating deforested belts around the hearth.” wrote the Minister of Defence, Mr. Niko Peleshi, on Facebook responding to criticism addressed to the department he leads over the management of the flames involving Sazan Island on Sunday, June 5th.

However, efforts of authorities to extinguish island flames with Armed Forces, maritime forces and fire-fighters did not work; Ministry of Defence was then forced to withdraw such statement within 24 hours. 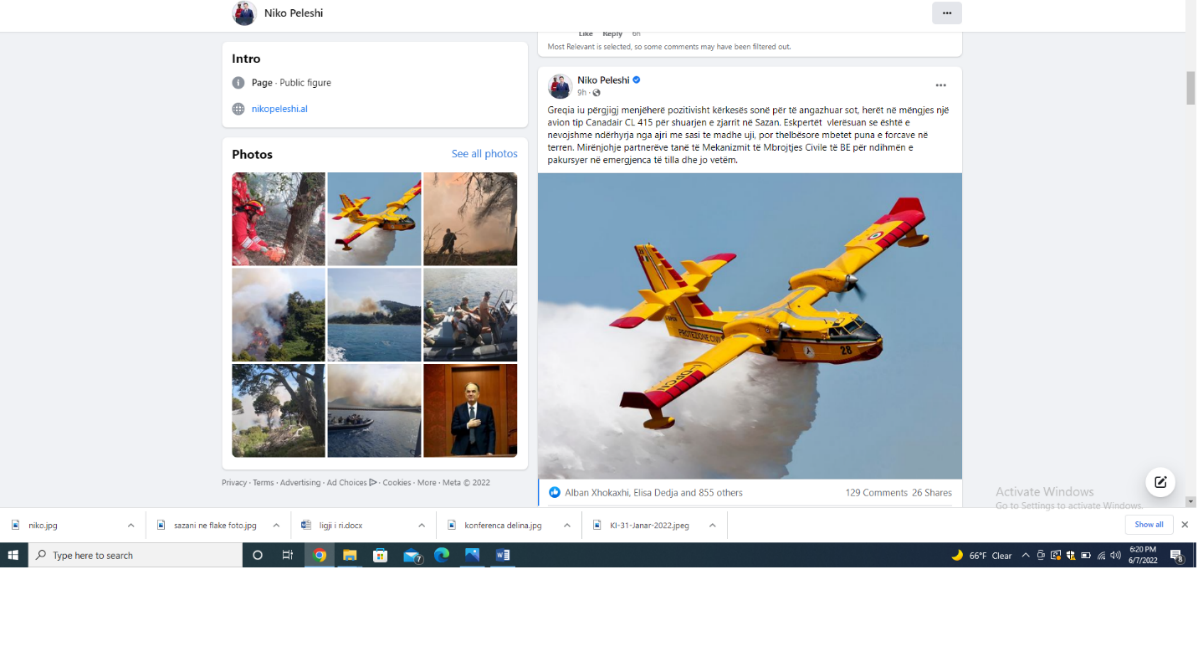 Early on 7 June, Minister of Defence Mr. Niko Peleshi announced the air intervention in Sazan, through a plane coming from Greece, in response to the activation of EU Civil Protection Mechanism.

“Experts assessed the need for intervention from the air with a large amount of water, however work of on-site forces are essential.” – wrote Niko Peleshi among others in his post.

But what changed the expert assessment within a few hours? The press office of the Ministry of Defence explains, in its response to Faktoje, that in such cases the group of experts assess the situation every two hours aiming to judge the intervention need for people, with extinguishing devices or with fire insulation.

“Yesterday evening at 23:00, it was assessed that there is need for intervention from the air and mass intervention with large volumes of water as the unexplored area has a large layer of humus/dried leaves. However, the final extinguishing is made with people because the air only lightens the flames. A spark rekindles.”- writes the press office of the Ministry of Defence in the reaction for Faktoje.

Albania’s request for assistance is also confirmed by Janez Lenarcic, European Commissioner for Crisis Management, responsible for European Civil Protection and Humanitarian Aid. He wrote in a Twitter post:

“We have activated the EU Civil Protection Mechanism upon #Albania’s request for assistance in fighting #forest fires that broke out at #Sazan island. A fire-fighting plane from Greece which has responded immediately has just arrive from #Greece.”

Eduard Demo, Head of Firefighting Intervention sector in Vlora was part of the first team arriving in Sazan to extinguish the fire. He says for Faktoje that the request for air intervention has been made to the Civil Emergencies since Sunday.

“Since Sunday at 11.00, we have asked for air intervention. It was also sent to the Civil Emergency Operations Room at the Ministry of Defence.  “We had a lot of difficulties there, the ground was very rough and we had to be very careful because of the area having ammunition.” – said Demo for Faktoje.

Meanwhile, the Former Head of the Fire Service of the country, Mr. Dilaver Laçi says that air intervention in Sazan should have been the only alternative.

“If there is one case where the air intervention is needed it should be Sazan island only and this is due to many reasons. The intervention should not be even from the air, but it was needed only from the air. The island fire is not extinguished with a pickaxe and a shovel. The intervention would be necessary by helicopter as the water is very close and the fire would be extinguished now. We took water from Kukës, threw it in Puka and we said it was close. They have the water there. “Meanwhile, another reason is the danger from the ammunition, because the lives of officers were endangered,” – said Laçi to Faktoje.

Even the Former Director of Civil Emergencies Mr. Shemsi Prençi says that air intervention should have been done from the day when the fire broke out.

“The only way to put out the fire on the Sazan Island is only by air operations. The fact that today a CANADER type aircraft extinguished the fire for 3 hours of operation shows that Albanian authorities let Albania burn by pulling out the air fleet of helicopters and this is done in order to burn the Albanian coast and remove it from the areas of protected to give to the oligarchs for tourist resorts…! – he states for Faktoje.

Sazan is the largest island of the country. Once a military base, the uninhabited island is turned recently into an attractive destination for domestic and foreign tourists. From May 2017, Sazan Island is open to tourists. But unlike other years, the official opening of the island for tourists has not yet been done this summer.